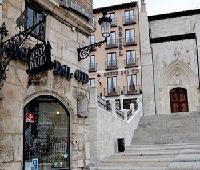 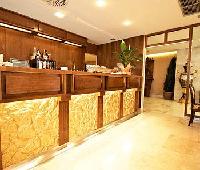 Stayed here for one night en route from Portugal to France.

We had a triple room which was just about large enough. Everything was clean, no air conditioning but it was quite chilly at night even in August. Pretty basic but was comfortable enough.

A 20 minute walk out of town, along the river. In a quiet residential area, although a number of small children came out to play underneath our room at around midnight!

Would probably not choose to stay here for any more than a couple of days or if we were not on a tight budget but it suited us for one night.

And we really liked Burgos which was interesting as well as buzzing on a Friday evening.

We wanted to get outside central Burgos before stopping while walking the Camino, and this was a good choice. The room was clean and comfortable. It felt more like a hotel than the other smaller hotels that we stayed at. They do not serve a meal except for breakfast, which was more abundant than the toast and coffee that we were accustomed to at many locations along the Camino. With them not serving a meal, the choices of nearby locations are limited and not real good choices. When I returned home, when reviewing my credit card choices, I saw I had been charged for our room through booking.com and by the hotel. I questioned this with my credit card, and it was promptly refunded.

Nice place for a stopover

Stopped over on the way to Santander from Valencia. Hotel is very comfortable and the rooms are adequately furnished. Only problem being the small size of the parking spaces in the underground car park.

Stayed here one night while in transit. Nice building with rooms some larger sized people might find cramped. The car park is underground and took some time to find the allocated bay due to being directed to non-existing bay numbers! It's okay as a night stop but I would not like to stay here. The staff are friendly and there are a few restaurants in the vicinity.

Stayed at this hotel for one night. It was an ok hotel, the only problem for me was we had a couple next door who were using the jacuzzi till late hours in the night so had a bad nights sleep, but the owner compensated me for it so I left happy.