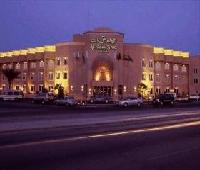 When we arrived we were told that dispite what the site says there's only fridge in some rooms. Because my son has medication they'd try to get us one. We had 2 rooms. 1st was dirty with left over food and childrens toys in drawers. 2nd all the bedding was in the floor still like room was never cleaned. Then we were moved to new rooms that was a bit better. When i went to shower it wasn't draining. I took pictures as to why. Large chunks of hair in drain. The walls were a mess. The outside was just as bad. When i went down in the morning there hot breakfast was cooks cereal. I was told they were out of bread bagels and waffel mix. Then when went to give them my credit card for the new rooms because of the fact we changed rooms they had to run my cards again. I was told the rooms we were in were booked for our second night and we'd have to switch. So we left. We were staying 2 nights because we were doing sixflags and wanted to be all set up when we got to room after so the little ones can go right to bed. So instead we had to check in to a new hotel late at night and it was a nightmare. But the new hotel was great.

On arrival we were given a room that was not only dirty...

On arrival we were given a room that was not only dirty, the bedding had not even been changed. When we complained we were given a different room. This room did not have a toilet paper holder, or tissues. The quantity of towels did not match the room size or the number of guests. The room was also dirty, but since 1st least the sheets were clean, we accepted it with the stipulation that it be cleaned thoroughly the following day. The staff has to bring in a microwave and refrigerator and we were told that they didn't have enough to go around. The tv was not connected. The pool was closed for the first 3 days. The sink didn't drain properly. The toilet didn't flush properly. I could go on and on, but the most important thing is that despite notifying management repeatedly of these, and more issues nothing significant was done to resolve them.

The bathroom was filthy, the front desk staff was very unprofessional when we checked in, they pulled up the wrong reservation information then proceeded to let us know " the booking company sucks really bad " and made that statement several times. The pool was closed, the WIFI only worked in the lobby and the staff assured us it worked every where. We sat in the lobby and witnessed three separate guests with the same issue. We decided to not stay our second night and upon check out again received unprofessional customer service laced with complete attitude. I have stayed in hotels all over the world even at a lesser price point and have never been in a hotel as filthy or experienced unprofessional customer service as this one .

one night stay was one too many

The hotel was very dirty and rundown. My carpet in room was filthy as if never vacuumed...ever. I would never recommend this place to anyone.

The hotel is nice and clean. The rooms were comfortable and well kept. The front desk personnel were excellent and very courteous. However, a maid keyed her self into my room while I was getting ready for a shower and proceeded to question me about whether I should be in the room while I was standing there in my skivvies. When I got the privacy to take my shower I found that the shampoo was actually body lotion. Luckily, I found this out before smearing it into my hair. I would give the place another shot, just because of the front desk staff, but I really didn't care to have the maid key into my room.