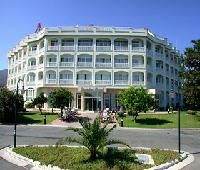 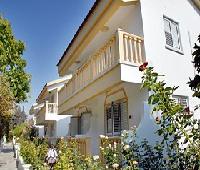 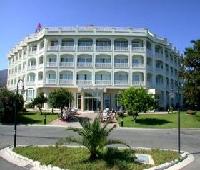 WORST HOTEL I HAVE EVER SEEN

Terrible hotel with unhelpful staff.Rooms were disgusting.And the staff were sleeping on the carpet.The pool was very dirty.The beds are really unconfortable and dirty.The breakfast was really bad.I dont know what else to say.Reception personel was unhelpful people.Everything was bad.

This hotel was not our choice ~ it was allocated by our tour operator, RSD Travel, and their local agents, Northern Travel. "Public facilities", reception, bar, pool and beach were good, hence the 2 stars. However, the same could not be said for our room or the dreadful food offered within our half-board package.

Our room was well-worn, scruffy and in desperate need of refurbishment. The bed was very low and had the mattress set into a high and hard wooden frame. The bath/shower drained out dangerously onto a smooth tiled floor ~ the daily supply of towels had to be used to mop up but as the room was not usually serviced until the late afternoon this meant the floor was wet all day and then again all night. There were patches of mould on the walls. Although reported to the hotel , no action was taken.

The food offered was for the most part dreadful, breakfasts only slightly better than the evening meals. Salads were monotonous and often lacking in basics such as lettuce and tomatoes. All meals were tasteless and with little choice, items would frequently run out and all too often were cold even when they should have been piping hot. Usually only pieces of orange or one small dessert offered with different toppings to disguise the lack of choice.

I was staying at this hotel as part of a tour with rsd travel who incidentally I would never book with again. The hotel is tired at best. It has a lovely pool and outside area with small beach and sun terraces. The rooms however are not that good. Ours was ok apart from no clean towels and beds being made at 6pm at night and a few plugs not working, well 3 out of 4.
The food however was dreadful particularly as we ate after the stampede. One night was I think chicken nuggets with rice and chips. The chicken was pink so we declined to eat and were left with the picked over monotonous salads. Another night all that was left was liver casserole with rice which is an acquired taste.Sorry but not very good and the manager stated he was only allowed so much per day per guest. i dread to think how little he was allowed.
The staff however were friendly but I wont recommend this hotel at all and I gather RSD use similar hotels so be warned.Others in our party had to change rooms owing to cleanliness.

Had lovely 9 days at this hotel,friendly staff,nice room with balcony,everthing we needed,we were bed breakfast,it was okay something we could eat.had few snacks for lunch,good menu reasonably priced,nice beaches,very quiet no night life and bit away from everything but could get dolmas top road which was bit climb but were two oldies not good on legs and we managed,we would go again.

The hotel needs serious refurbishment ,room was clean but bathroom dated with tiny corner shower that needed replacing. Staff never seemed very happy, not much choice at breakfast, need more cereal, and need to stop serving chips at 7am .