Year Built - 2000 Year Remodeled - 2011 additional Property Description - This Small/ Private Hotel Is Located In The Porz-Eil District Of Cologne. It Is A Bed Breakfast Hotel With An Extensive Breakfast Buffet. There Is A Restaurant In The Same Building. Hotel Facilitites Include A Sauna And A Private Underground Car Park. The Hotel Has 3 Stories And A Lift. 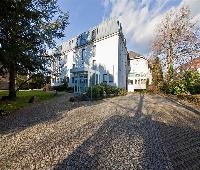 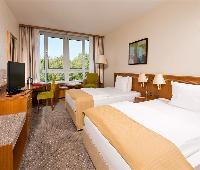 Year Built - 2000 Year Remodeled - 2011 additional Property Description - This Small/ Private Hotel Is Located In The Porz-Eil District Of Cologne. It Is A Bed Breakfast Hotel With An Extensive Breakfast Buffet. There Is A Restaurant In The Same Building. Hotel Facilitites Include A Sauna And A Private Underground Car Park. The Hotel Has 3 Stories And A Lift.

Getting the basics right

The staff are lovely; the rooms are clean and comfortable; basic, but if you're on business and just need a place to lay your head, it's perfect. The breakfast, again, is simple fare but good quality.

Basic but clean and welcome

We booked here while visiting Gamescom, the staff were very welcoming and accommodating, the room was clean with everything we needed, no wifi was a disappointment but not a big deal, other than that a perfectly adequate room at a good price.

We visited cologne for a quick weekend getaway. En route a friend received some bad news of a family bereavement and so decided as we was almost there we would stay for 1 or 2 nights instead of the 3 and then travel back.
We got to the hotel and explained this to the lady behind the counter who said its not a problem and we should just pay for the nights that we decide to stay. We told her that we would in that case stay for the one night and check out late afternoon the next day to which she agreed. We were told were our room was not shown. We then went to our rooms to freshen up. As the hotel advertises wifi n the rooms I searched for a wifi signal which I only got a very week one by the door to the room. I needed login details so went back downstairs to get them. At the counter this time was a man who I assume was the owner. He was quite blunt with me when I asked for Internet and told me that it isn't available on our floor to which I responded with wifi is advertised in the rooms. He gave me a piece of paper and told me to use that. I asked him to show me how but he was reluctant to do so. Therefore we couldn't have wifi for our stay. The hotel also advertises a sauna for guests. We asked him if we could use it but he said its not available to us (yes as blunt as that). I really don't think he likes English people. Maybe I'm overreacting but this is how it came across.
We went out for the day and had a good day in Cologne. We went back to the hotel only to find no one there and all of the downstairs locked up and the lights off. This was about 8pm!! We had a couple of drinks in the bar next door then went to bed.
The next day we got up and packed our stuff up and left it all by the door ready to leave when we got back as discussed. We went downstairs. We found the owner with a German guest explaining the wifi and then he showed him to his room. The exact opposite to the treatment we got.
We went out in to cologne and had a mother good morning and afternoon. We then went back to the hotel to find it all locked up again with no lights on downstairs. As we were due to check out we tried to call the number on the door 3 times and there was no answer. Great health and safety! What happens if there was a fire or a break in or a problem with the room? Or like us you want to check out and pay the bill! We out the money for the one night along with the key in an envelope with a letter and put it in the key drop box.
We then travelled home.
So that night we found out that the hotel had taken money from our credit card for the full 3 nights even tho they had said we could stay and pay for the one night. Also even after we had paid in cash for the on night!
Please avoid this hotel as they are racist thieves with a terrible hotel and terrible service!!

We arrived late, the key was in a special box and for the opening code we had to call a telephone number.

Nice and clean place, with the softest, whitest towels ever! :)

The only one disadvantage was that the elevator did not work after reception hours, so we had to climb up with our big cases to the first floor after midnight!

Normally I'd expect a hotel with airport in its name to have an easy connection to the airport. This one didnt, although it is close and taxis are easy to obtain.
Hotel staff were polite and efficient and stayed late keeping an eye on the planes arriving at the airport, until we arrived to check in. There were times when no English speaking staff were available, eg early mornings. Not a problem if you speak enough German to get by.
The room was perfectly clean, with good facilities in line with the price we paid.
Staff opened up the sauna specifically for me. I loved having it all to myself. It was wonderful!
The restaurant next door serves Italian food and operates a discount scheme for hotel guests. The food is tasty, reasonably priced and again, the staff stayed a little bit later to serve us.