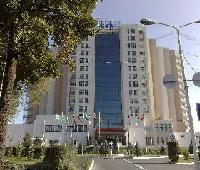 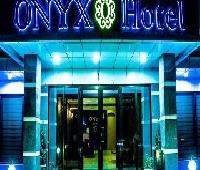 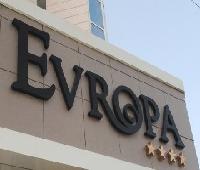 At swimming pool, no space to change clothes with lock. We saw a man intentionally opened door at ladies' place without lock in order to peep inside, pretending not known.

Toilet is one one at each of lady's and men's.

Although we asked for 500ml water for starter, but waiter brought 1 little with double price, which was not on menu. So we did not want to buy anymore. All prices are 6, 7 times higher than in usual shop. In such old and average-level hotel???

Swimming pool itself seems not so long time after repair and is relatively clean and shallow place is suitable for kids.

Hotel reception is helpful and taxi arrangement is quick and affordable.

From the room to the lobby and restaurant, everything is ageing and looks tired.
Breakfast selection is very limited and on one of the days, there is no buffet spread and items had to be ordered ala carte from the menu.
I visited in Summer (August) and the room is unbearably hot. Air conditioning is very weak, even the air outside is cooler than the air blowing from the aircon.
The water pressure in the bathroom is strong and water heater works well.
Electric kettle is NOT provided. Free WiFi is provided but that seems to be the case for everywhere else in Bishkek.
There seem to be only one staff who can speak English and she is at the reception. All of the rest of the staff didn't seem to understand English.
Only redeeming feature is that the view from the room is quite nice.
On another day, I stayed at an apartment that was half the price and it comes with a kitchenette and strong air conditioning unit which is very important as the Summer temperatures can go up to above 35 degrees Celsius.
If I returned to Bishkek, I would most likely not stay here again.

Very nice staff, old bed, great view of mountains. Breakfast was great. Very close to US Embassy. The pool was empty for winter. Wi-fi was extra, but a direct connect in the business center was free(2013-14). TV was sparse for English stations.

Some of the reviews call this a Soviet hotel, but it definitely is more of an aging 1990s relic. The staff is helpful and pleasant, the rooms are perfectly fine (nice, firm mattress!), the breakfast is the usual Central Asian hotel breakfast, and my room had a balcony and a view of the mountains. Off season, the place is quiet and they do keep the lights off in the lobby to save electricity (I can't fault them for that!) There are only two problems: off season if you want food from the restaurant you have to eat it in the bar and it's relatively pricey, and the fitness equipment is in terrible shape. The treadmill is downright dangerous. If you're a man, you can go running across the street from the hotel, but women better not count on getting any running done (women don't jog in public spaces here - go to Spartak Stadium if you want to log some serious mileage).

I don't know where to begin, so I'll start with my first entry through the revolving door. The lobby lights were turned off and the lobby was dark, even during the day. There were two guards near the front desk but they just sat there looking bored. I went to the front desk to check in but noone was present. After a "Hello" a young woman came out and checked me in. I offered my Barclay Bank Mastercard but was told they preferred Visa, but cash was better, especially US dollars. If you stay for more than a few days, bring a Visa credit card or lots of cash in US dollars.

The hallways were dark since all the lights were turned off except on the floor I was staying on and the two floors immediately above and below. The other wing of the hotel opposite the elevators from my room were completely dark and the lights were turned off on all floors. I guess they were trying to be green by turning off the lights, but I later realized there were only a handful of guests in the hotel. When I checked out at the end of my stay, I noticed only two other room keys removed from their cubbyhole behind the front desk. The hotel was deserted the entire time I stayed there.

I got a room with the pink furniture shown on one of the reviews here on Tripadvisor. The room was run down, and is definately overpriced for what you get. If you want to experience what a hotel was like during the Soviet era with remnants of poor maintenance, this hotel would be a good choice. I'll just summarize some of the things I found in my room that really shouldn't be present for a room costing $100 a night.

Security: There is only a keyed lock on the door to the room, similar to what you would buy at Home Depot for your bathroom door. There's no deadbolt, no peephole in the door, no electronic card key, no elevator control, and no in-room safe. The lobby has a metal detector placed by the revolving front door but anyone carrying a cell phone would set it off so it was useless as a security device.

Cleanliness: The bedsheets were clean, white, and heavily starched, but they were never changed. The housekeeping just made the bed and didn't change the sheets. This was not because housekeeping was busy and overworked, since there were only a few people staying in the darkened hotel. One of the towells had a stain on it, I assume after being used to wipe something. I requested a nonsmoking room, but the room had an ash tray and the closet had the smell of cigarette smoke. The carpet was worn, and patched in some areas, with stains visible. I was nervous about walking with bare feet when I first arrived in the room but later realized the stains weren't going to hurt me; they are permanent and won't come out.

Wear and Tear: The furniture were all well worn and had shown the results of years of use. The pink table had wear that exposed the bare wood underneath. The chair's cushion has worn out and you'll feel the hard base when you sit down. The bed was very worn, with the mattress no longer flat and the springs squeking each time you moved or turned while lying down. The pillow cover and sheets were in good condition, but the blanket was worn and had fraying edges. Overall, the room showed signs of heavy wear and tear, which is not what I had expected from reading the reviews and paying $100 per night in Bishkek.

The bathroom was an interesting experience. The shower head was old and didn't produce a spray pattern, just a stream of water like what you would get out of a water hose. There are two dispensers mounted on the wall for dispensing soap and shampoo, but they were empty. The small hand soap provided by the hotel was rough and low quality, so I would advise bringing your own soap or buying some at the store down the street. I was also unable to close the bathroom door without a lot of force because door was not plumb and the bottom scraped against the floor and prevented closing. I ended up leaving the bathroom door partially open when I took a shower or answered the call of nature.

Since most of the hotel was dark with the lights turned off and rooms closed, I have no idea how the gym and indoor pool was because they were inaccessible. There was also a breakfast provided with the room rate, but it consisted of some bread, apples, oranges, cucumbers, cereal, and other small items one could buy in the store down the street. There was no fruit juice, but only coffee. You would be better off buying some fruit and pastries at the store on your way to work rather than indulging in the breakfast offered by the hotel.

Overall, this hotel was a very poor value and a bad experience. The pictures and ratings by some of the reviews on tripadvisor didn't match the reality of this dilapidated and deserted hotel. I wouldn't recommend this hotel unless you can get a room for half the rate.