-we Welcome You At Akademicheskaya Hotel. It Is Ideally located In The Beginning Of Leninskii Avenue At The intersection Of Kalyzhskaya Square And Sadovoe Ring Not Far from Business And Historical Center Of Moscow. we Offer You More Than 300 Cozy Rooms In 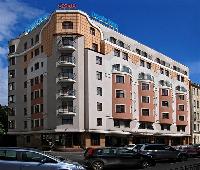 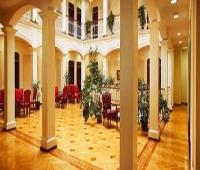 -we Welcome You At Akademicheskaya Hotel. It Is Ideally located In The Beginning Of Leninskii Avenue At The intersection Of Kalyzhskaya Square And Sadovoe Ring Not Far from Business And Historical Center Of Moscow. we Offer You More Than 300 Cozy Rooms In

Isn't getting any better...

Had to stay here again, after an absence of a few years: things have gotten worse! The one plus: the mattress slept well... after I made up the bed myself (maid apparently "forgot" to put a duvet in the cover). Shower was not well regulating and fixed too low on the wall, so had to duck, and shower curtain left hardly any room to stand in the tub. All lamps were unplugged (and shone dimly once plugged in). The adjoining lift made a racket, and noise level at front side is bad, day and night. Curtains did not shut out enough light in the short nights of June. The (included) breakfast was poor in selection and moderate in quality. I think I paid way too much for the quality.

The location is really good, near Metro Oktoberskaya, and Gorky Park. Rooms are clean, confortable beds, bath inside the room, kind attention in the reception, and the best notice:
2,700 roubles per night, breakfast included!! The breakfast is a buffet very nice.
You have near a place to change money, a supermarket and several restaurants of fast food.

The room is relatively comfortable: two tables, much free space. Everything is clean, and the towels are changed daily. The wifi, however, is unsuited for the number of rooms, and you can connect for longer than several minutes and with reasonable speed only when nobody else wants to, such as at 3 am. The staff is usually polite, but rather unhelpful (especially about wifi connection) and unsmiling. The breakfast is awful, especially the instant coffee. I would recommend the hotel to those who come for sightseeing and are only going to come to the hotel room to sleep, but not to do any work.

It's a Cheap hotel the reception is friendly and the will try to help you. The speak German English
The rooms are nice a little bit old but everyday they are cleaning everything.
Don't stay for the breakfast it's very very bad.

Around the corner a French bakery you must stop over there for you breakfast.

This hotel has 2 big advantages: central location- metro and Leninsky avenue, and money return is you leave earlier. It is very close to many attractions such as Gorky park, Tretyakov gallery, etc. I was here about 30 years ago and found in fact very little changes, it looks like oasis of old Soviet era: the same rooms, furniture, bath, even Wifi is blicking as a distant star in the sky. Breakfast is also very moderate,but stuff friendly. All this reminds me famous German movie "Good by, Lenin"