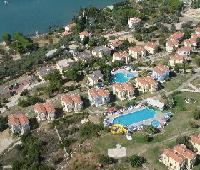 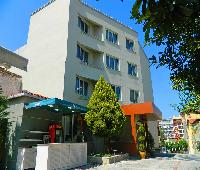 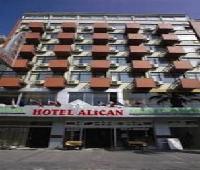 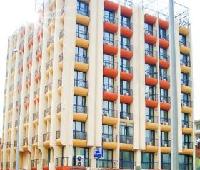 I had nicer accommodation when our car stalled in the middle of nowhere in Bolivia. And that shack had no power or water or heat. This place was covered in black mold and the bathroom reeked horribly. When we arrived they refused us despite our having confirmed the reservation multiple times, in Turkish. Wish we hadn't argued. We had booked a villa but ended up with 2 rooms. The rooms were unconscionable. The linens were filthy, the single bed tried to fold up on my Father, NO fresh water -sea water- explains the smell, AC didn't work, frequent power cuts, construction was shoddy-Window gaps crammed with newspaper, blood in the curtains- looked like someones hand went thru the glass and they didn't even clean it up- glass on the floor tape on the hole, scabby bandages in the nasty pool. I could go on at length. The second day There was a forest fire nearby and the smoke was streaming into the room through all the gaps, so we decided to leave. They didn't want us to check out, and refused to refund any money. We had booked through a time share where previous properties had been very nice, don't know how this got on the list. The pictures on the website were mostly of the hotel next store, when we mentioned this they said it wasn't misleading, they never said it was their hotel, it's the viewFROM their hotel. We were on the phone day and night with the booking company and never got a call back. The manager of the hotel lied and said we stayed in the villa the whole week and never complained. After getting no resolution we dropped out timeshare club membership- this experience can never be repeated.

the worst accomodation I've ever seen

we received an dirty apartament with broken walls and mold. we asked for another one and after 2 days we accept another apart BUT they disliked our requirement and next morning we found our car deeply scratched on the hood.

What you pay is what you don't get.

Service was terrible.
I booked the family suite for 3 adults and one 8 year old child. Obviously each of us needed bedding sets and bathroom towels. Although it was a part of their reservation policy to get the names and the ages of the occupants, they terrible failed to provide enough number of bedding and towels after 10hr and calling them 3 times. We had to walk to the reception to argue with them to get these basic stuff. The bed sheets and towels had dark spots on them, obviously they were not washed properly. My bed sheet had dark stain on them resembling 5 fingers, seemed like someone used it to wipe something. Pillow case looked like it was used before and towels had hair on them.
The small refrigerator in the room was not working. Asked them to change it, which they did.
Food was ok, if you wanna save some money you can definitely do that by eating cheaply made breakfast jelly and honey-faloverd fake honey.
Although its remotely located, I am not going to complain about location since you are supposed to map it before booking and realize that its not downtown area. Unless you have a car know its going to be near impossible to do sightseeing.
Would I stay there ever again? NO

Tatil Sanati Tur is awfull and they work with this hotel manager to make more money out of guests!!!

I stayed in this hotel three weeks ago. Unfortunately it was not a good standart hotel as it seems. The manager of the hotel pushed us to pay more money to stay in the hotel while our booking were already fully paid. And almost he said if we do not pay he will call the security to put us out. The reason is that he said our agency did not pay to hotel for whole our holiday. When we asked to see the hotel owner then he said its ok we can stay further.
When it comes to staying in this hotel, the foods quality is avarage however going to sea is very painfull. There is limited hours to go to the sea and there is not beach front of the hotel as it seems in the picture. Hours to go to sea 10am-6pm. Small boat take you in 15 minutes to the small island where you can swimm. The rooms were not clean and located on the mountains and it is very difficult to walk under the sun. I dont reccomend this hotel, there is doggy stuff there!!!