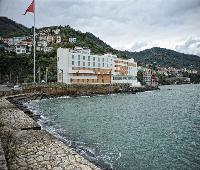 We stayed two nights here in last June, and were really happy with the hotel. Best thing is, that the hotel is only 200 meters from the public beach. It was actually totally ok to swim there. The beach bulevard starts from the hotel and it is possible to walk by it to the centre, which is quite far away though. That's the only negative thing. It's possible to buy snacks and beer from a grocery kiosk maybe 400 m to east from the hotel.

Also, there was a huge wedding party (we figured out that's quite common) there at night, but it didn't disturb us. Though I don't know is one is light sleeper, it could have been a problem. Breakfast was nice and had a lot of variety. Also the rooms were new, nicely decorated and really clean. Price of a hotel night was quite high compared to overall prices in Turkey, but we thought that the value was ok.

Staff was nice, but they didn't speak any English.