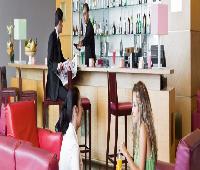 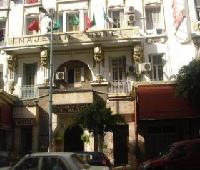 Moderate hotel in the centre of Casablanca

Hotel in the centre of Casablanca with friendly staff.
The rooms have no luxury, but there is airconditioning and some rooms have a bath.
Noisy area (best to take the top rooms). Only wi-fi in the hall downstairs.
You can drink beer in the bar/restaurant next to the hotel, but you have to tell them you stay in the hotel (otherwise they charge you more).

One of the best reasons to “escape” luxury hotels is to experience local life. Our room in this centrally located hotel was basic yet adequate with a great view over the streets so we could watch locals at their favourite afternoon activity - people watching. Everything worked and we too had to share the aircon control too (hardly an issue if it’s returned to the front desk). Restaurant staff were most helpful as were the busy team at reception. We loved the art-deco décor and the evening’s entertainment. It seemed like a blast from a 1920’s movie. Yes, a bit noisy but a great place to be thrown headlong into the real Morocco.

A park bench would be better than here !

The Room was dirty along with the ensuite, I accidently dropped my phone under the bed, yuk. I had booked it on a weekend not sure whether the night club next door runs seven days but it was as loud as an AC-DC concert and did not end until 3.30 am. Then the was a constant stream of coming and going by who knows, but I think they were working girls ! I think management may believe that the clientele may need a lot of cold showers as there was no hot water. The bed itself had nasty lumps and bumps impossible to sleep or was fear of what may crawl out from under the bed.

Better places to stay in Casablanca

Fortunately we only had one night here as it was part of an organised tour. Unfortunately it had poor security and was in a sleazy area of town - two negatives when it comes to women travelling alone. The tone of the street changed about 8:30pm with heaps of guys hangjng around so we were glad to have eaten an early dinner. The street outside the next day resembled a rubbish dump! The ornate foyer was quite a contrast.

Our first twin room only had a window opening onto the internal stairs which concerned us as it had direct access to the bar downstairs so we did not want to leave it open. The staff were helpful in relocating us but not much sleep was had due to noise until 4am from the bar. The shower curtain was also broken which made it difficult to not wet everything when having a shower. The breakfast was simple yet delicious. The staff were helpful with restaurant recommendations and directions.

I was booked into this hotel by the tour group I was on. I knew the tour was a budget tour but was not prepared for this hotel. Upon arrival I was greeted by a very helpful lass and a smiling porter. The room was small but adequate, however the bathroom was way too small with no aeration and smelt very musty. The very small cupboard for clothing was not usable as it smelt very badly. The bed was a double but the mattress was hard and lumpy. I could not move in the bed without a terribly loud squeak. The noise in the street during the night was too loud to have a decent sleep, but the location I though was good for walking around. The breakfast was simple but enjoyable.