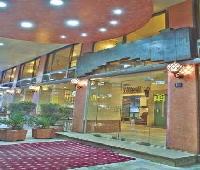 The Worst Experience Ever

The hotel is the worst hotel I have been too. The room is shabby. Toilet is dirty and really not acceptable. The water from the flush overflowed because of problems with the pipes. Breakfast was dry Arabic bread with poor quality cheeses and stale olives. The front desk guy was the worst ever. I misplace my room card (it was a regular room card not keys. the type that coukd be sorted out a card machine) and he demanded that I paid him US$10 (bear in mind that ppl earn abt US$200 per month in Syria) When I protested saying that it was too much, he started getting aggressive and shouted at me and even told me to get out of the hotel. Al-Jazeera Travel in Amman does business with this place which is a real shame. Spend a bit of money and stay in the Sheraton where I stayed for the subsequent two nights.

I stayed here for one night. Not luxurious, but clean with good AC. It is next to a main road, so might be a bit noisy for sensitive guests, but not excessively so (has double layer windows).

Within walking distance to once of the main squares with clubs and restaurants in the vicinity (close to Four Seasons Hotel).

Internet expensive, but an internet cafe just next door.

Good midrange choice if you stay for two or three nights.

I stayed there for 2 nights when I arrived in Damascus and 1 night just to sleep after my departure. The first night was terrible. They just had available a very loud room facing the main street on the 2nd floor, the second night they put me in a quieter room on the back with a very ugly view. Room is very old, nothing looks good, the worst was that when I had to blow dry my hair the lights went off. So then I had to reach out for my blackberry for some light to call the reception every time that happened, which is very annoying!

The most filthy hotel we ever stayed in. It's a shame that a wellknown travelagency named Djoser in Holland does business with this hotel. It appeared to be a real nightmare: dirty torned sheets, a dirty and stinking bathroom, shabby floor covering, curtains full of spinrag, etc. A very poor breakfast, most unfriendly service. Do'nt ever book this hotel!!

its a very simple hotel ,but not so clean, its better u take a set of bed sheet with yourself or buy it ,same for towel , its a safe hotel and air condition dosent work very well , its not terrible but they are not so carring about cleanliness. anyway i enjoyed my stayment there and before the weather get so hot i came back !