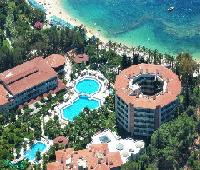 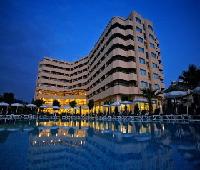 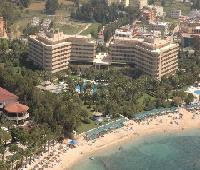 This hotel is a joke!

Edit 2: there is no Wi-Fi in buildings everything is built in 1983 there is no place by bedside to charge our devices, still trying to get into contact with a manager.

Edit: the water got cut off for 3 hours in the middle of the day, no shower, no flush, no service, no refund of our money. This is just getting worse and worse.

Currently still in the hotel in one of the twin bedroom rooms. This place is in no way 5 star hotel! Tourists be aware this is not the place what it is advertised to be! Get into contact with your agent and request a different hotel.

On our first night we arrived later than midnight and their policy is not to make check-in after midnight so first they treat us like they are doing us a favor by letting us in the hotel. Extremely poor welcoming and the person who brought us to our room, Emre he used insulting words towards my father and was almost met by his fist if I had not stopped him. The reason of the argument was they got us a room with a malfunctioning bathroom and simply did not do anything to replace it at night and their alternative was another room with an even more broken bathroom.

The staff is super new because it has been lately changed the way they operate and I am assuming they just hired all new people without proper training which explains the staff's poor attitude and their "it's not my job" viewpoint.

I have been trying to get a hold of of a manager but when I went to lobby there were other angry customers who made a huge scene and still no manager shown up to calm the situation. I feel like this is a place that just runs itself without supervision, and makes me sad because there is just so many potential.

Avoid this place if possible and I hope your views on Turkey, this beautiful country, does not get tainted with places like here.

The holiday started like a nightmare. During first meal which was a dinner I almost lost my nerves. The Kebab was dissapearing and I just watched how the staff was making some activities which I can call thievery because they started to save the meat for themselves. I agree that they are working the whole day a they really work very hard, but this moment it was unacceptable because we pay for the food. I know that staff is allowed to take what left after the serving food to the guests. But not during the meal. But back to better things. The area of the hotel looks very nice a there is lot of workers they take caro of it so there is no problem and the "garden" look pretty good. The same I can say about the main pool. Talking about the title of my review it is precise. The management of the hotel makes everything to make them feel like at home without consideration the other non-russian guests. Russian songs, activities for the children and adults in russian language so if you dont understand russian it wont be something for you. And the people... There is a problem because I cant say all russians are the same. But the bad half or third caused that the appearence of the russian guests doesnt look good for the. Their and theirs children manners were like they never been outside among the people. No knowledge about the basics of etiquette, wasting with food and acting like the hotel was owned by them. But its the shame for the other russian because they could say something to their "comrades". Back to the staff. Despite the first negative experience I have to admit they really worked hard a they do their best. Since the breakfast till dinner they were the whole time in the restaurant and obviously its not a dream job. The hotels beach was smaller than I was accustomed to have more space while Im going to the sea. Menu in A la carte restaurant looked like a cheap menu from fast food. We chosen the turkish menu. But people who had the Baltic menu (fish) look also very "satisfied". However the bad things I mentioned the holiday was very good and dont forget to visit grand bazaar and have a coffee or tea or something because you hardly can find russians in the bars....they are drinking on the hotels...and we enjoyed thats moments without our hotel partners.

We've just returned from there, spent 6 days. Positive : great animation team, nice area with orange and palm trees, nice water slides for kids and adults, close to the beach. Negative: not big variety of food - definetely not sufficient for 5* , VERY long queues for the food, the sea is not clear - it is green and muddy; almost no beach, just a very thin line.

We have just returned from a weeks holiday to Alanya. We stayed at the Alara Park Hotel (the one which looks like a polo mint). The rooms have all undergone a complete refurbishment and we were the first ones to use them. We had 2 interconnecting rooms as I have 4 very young children. The rooms were clean and a very good size. There are no electric kettles or irons in the rooms. If you want to borrow an iron, you have to leave a deposit of 20 Turkish Liras at Reception, which is returned once you return the iron. You can only borrow the iron for 1 hour.

The food was average with plenty of salad for salad lovers. The coffee/soft drinks machines do tend to play up and the result is a drink which is either very weak or very strong. The waiters were fantastic and were really helpful. The reception staff are good too, but their English is limited. The hotel is very popular with people from Russia and I think we were the only British family there.

The beach has lots of pebbles and not very wide for children to really have a good play in. However, my four enjoyed it.

The pool area is good, however the water slides are only switched on from 10.00-12.00pm and then 2pm-5.00pm and sometimes, the water slide is still off in between these times.

The indoor pool is not heated, as is stated on their website.

Within a 5-10 minute walk from the hotel, you walk over a long bridge and you come to the tourist shops and eateries. It's pleasant enough just to stroll.

The weather was okay. We had 2 days of rain, heavy at night but lighter during the day. The general temperature was around 20-23 degrees.

Overall, the holiday was nice because the children enjoyed it.

Not a 5 star hotel, but definately had a great time!

To start, when you first walk in, the hotel is amazing. The lobby is very modern and the hotel is clean. The one thing that is unmatched in this hotel is the landscape. Everywhere you look you are surrounded by grass, palm trees and various fowers. It is beautiful! We checked in late (around 8pm) and made the end of dinner the first night.

The food is really good and there is always something to eat, however, as in most all inclusives, it is a little bland since it is meant to feed many different tastes. The food is fresh and there is always a variety to choose from. The rooms are very spacious, however, not 5 star. The curtains, for example, had questionable stains that looked like little flecks of blood, the tv was a small tube tv and had maybe 25 channels, with only one in English (BBC). The bed offerred little support for my back and was difficult to sleep in at first.

The sheets however were very clean, and were changed along with the towels daily. We left 2 lira on the bed every morning and the cleaning lady made us different designs with the towels and flowers.

The staff in general were very polite however they only speak Turkish. Russian and some German, so other than the animation team, we found communication difficult.

The downside: Russians. Many rude Russians. If you've been on holiday with Russians you know what I'm talking about.

Also, I had to wake up at 5:45am to place towels on the beach, because they had very limited places. Because of the placement of the hotel, the sun goes out early, and is impossible to tan on the beach after 6 pm.

Overall, pleasant stay but wouldn't go back any time soon.