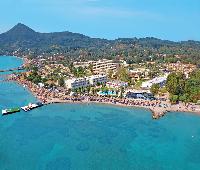 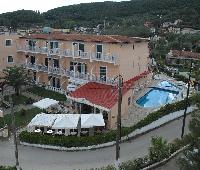 My title refers to the suspended tiles in the room, which danced in the slight breeze if we left the door to the balcony open, at night it was hot in the room, you could use the airco but it had a broken thermostat and that meant after a while you had to wake up to turn it off because you would be freezing, as already stated here food choice was limited, and ran out pretty fast if you were half hour late for it, pool sucked to be honest, just about got the paint off my toes, also the pool side chairs were at a premium, they all had towels on them, but not many people, often wanted to just take the towels away...I could go on, it wasnt great..Animators ok small budget etc, but they were not once friendly toward us, not even hello....Well we were half board...Love Corfu, made our own fun anyway and will certainly return next year but Albertros?? I hope not sorry.

Great Holiday but owners need to spend some money on this place!!

Just come back from 2 weeks in Corfu at Hotel Albatros where we had a fantastic Holiday (!) and some superb weather. Never saw a cloud for 2 weeks. Warm sea and great for kids.
{We have visited other hotels at similar Price Ranges in Mallorca and Tenerife over the previous summers so felt well qualified to give an opinion/ comparison}

However..there are some bad points along with the good points which should be noted but read on….

Bad points:
1) Room- Our room (203) had lovely views BUT a/c unit was over the top bunk so children had cold air constantly blowing on them. How ridiculous is that!
2) Toilet is 10 cm’s from the bath as someone said already - so you can’t even use it properly. Which idiot designed that??
3) Air con downstairs- The restaurant and lobby area are very hot as there is no air con or fan. It needs something as its just too hot downstairs……
4) Food Choices- Every day I could find something to eat but there is very little for the kids so is just about adequate no better (And they are not fussy eaters). At a so called 3 star hotel it should be better (kids menu?). Breakfast should be better also (we had off milk on the first day!)
5) Do half board as all inclusive must be very tiresome......
6) Entertainment- The animators try really hard and should be applauded but they can only do so much with a tiny budget. Every day darts,darts,darts….becomes boring ! There should be Water Polo or more activities for the youngsters (and older) to do.
7) Smoking- Realize this is a problem in Greece all over but why not make the pool and restaurant area (Inside and out) non smoking. We couldn’t go outside and eat as there was always a smoker- horrible while eating….
8) Sunbeds- we always got one if towels were down by 8am but they could do with an overhaul as they are collapsing slowly.....as with their umbrellas beside them which blew into a few peoples faces on more than one occasion...

All these bad points can be attributed to the owners who don’t want to spend a penny! Which is such a shame…..(One just stands around looking miserable smoking his cigarette) …

Good points:
1) Staff- Waitresses, waiters, barman, receptionists, animation staff are all really great and very helpful
2) Position- It couldn’t be any better. Right on the beach. Lovely restaurants nearby and nice walks

There is no way this is a 3 star hotel- Its 2 star at most…..The quality just isn’t there. Not many English but that’s not really an issue for us (We met two lovely English families luckily while there which really improved our hols)

If you go into this holiday accepting you’ll get a few issues you’ll have a great time- Position couldn’t be any better and most staff are really good (Mel the English waitress is fab)….In hindsight I’d have done 12 nights rather than 14 as my kids were getting bored towards the end.

For me personally, the position (and weather!) made up for these bad points and I would recommend this holiday (Including the hotel) but I’d like to see the owners spend some money on this place and improve it….OWNERS Please take the hint!!

If you’re heading there I think you’ll have a great time as we did….

TIP: If you venture out, go to the restaurant called Archontiko as its absolutely beautiful with great food and the best views....

Hotel is in the very small town and it's not much to do there, but if you are going with family it's perfect location. 2 min walk to the beach and restaurants. Beach is nice, warm water. Sea is not deep so it's great for children too. You'll have to pay 3 euro for the sunbeds. Hotel is very simple a bit tired but for the price I did pay was ok. I would suggest not to take all inclusive or breakfast & dinner. Food is very poor!!!!! I did have food including but I had to go out to eat!!! Staff is nice & friendly!

Fine! In the room everything works, room was renovated, for dinner there is a choice of fish or meat, near the sea, the staff is friendly. The sea can be seen from the balcony. There is even a simple animation. The price and quality.

So we arrived at thw hotel, which looked lovely from the outside! Once in and into our allocated room, things went down hill..the room looked great up until we entered the bathroom. The bath and toilet literary touch making it very difficult to have a pee without sitting on the toilet in a very awkward position. We also had no hot water to wash most of the time, I did tell the staff who said they went out thier way to sort the issue, in the end I gave up telling them and just accepted washing in cold water! The beds were very comfortable and we slept well, the aircon was amazing and kept us cool at all times. The room was clean and tiny, the maids come every day and they were outstanding!
The hotel over all was clean, the staff were brilliant and very helpful and friendly!
The location was spot on as u walk, not even a minute before u were touching the beach!
A down side was the pool keep leaking some sort of blue dye on to our skin every time we had a swim, also people hog the sunbed/loungers around the pool side even though they are not actually using them..i was sneaky and stole someone's umbrella as they were no where to be seen for over a hour, when that person returned they thought it was thier god given right to own it...signs do state that the loungers and umbrellas can't be reserved by towels but the staff seem to take a blind eye!
Next subject .. Food!!!
Omg I don't know where to start, we were half board (thankfully not all inclusive)
The continental breakfast consisted of 3 types of cereal always the same 3, 4 different types of bread, if u wanted to toast it like me, then expect to wait at least 30 mins before any sign of Browning, by then the toast will still look like a normal piece of bread even tho it's rock hard! If u have a lucky day then there is pancakes other than that expect smoked sausage and a salad! For evening meal...u might be best to not have your children with u as it's also very limited...my kids are not fussy eaters but even I struggled to feed them rabbit and calfs liver..pudding was also poor!!!
Evening entertainment was poor so u might be best to go to the local golden beach bar...i think this hotel caters more for Germans rather than English...so if u are English might be best to avoid this place...the one thing I would never fault is the staff and cleanliness of this hotel, also the location! I'm not going to sugar coat things but don't expect too much for your money...i think really it's 2* rather than a 3...! U Might also want to consider when booking this hotel that children are not really catered for! Half board isn't worth the money as we ended up eating out more than eating there. It's also quite outdated facilities...please don't let my review put u off as u might enjoy the hotel personally I feel I had been ripped off (money wise)