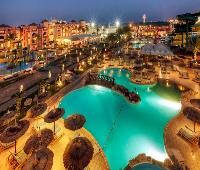 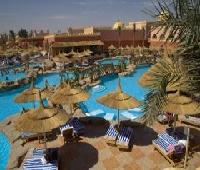 I honestly would never go back to this hotel and to be honest it has put me off Egypt a bit.

The hotel itself was very poor, there were 4 or 5 power cuts at least every day. There was one day where there was no air conditioning at all in any rooms for a night. There was also rarely air conditioning in the lobby. There's no free wifi, and don't waste your money on paying for it as it doesn't work and they cut it off at night time.

The food was the same every night and lunch. Half of the time the drink dispensers weren't working and hot drinks weren't available. There wasn't any bottled water in the day or at the bars, they only had water in a dispenser which was warm from the heat.

We were constantly harassed by the lifeguards for jumping in the pool, even though it doesn't say no jumping and other people were doing flips into the pool. There were always sale reps selling things around the pool, and they also wake you up if you're asleep to sell you things. Do not buy anything from these people! They're scams and what they say is not what you get.

Most staff members were rude and unhelpful with the issues they were having. They were a few members who were exceptional, one particular waiter in the restaurant was especially friendly, and helped to ensure one of the children's birthday was special.

However, the days were spent away from the hotel were amazing. We did scuba diving with Red Sea Sky diving, which involved going to Griftun Island as well as snorkelling. We brought this from the excursion man in the hotel by the entrance. They even offered us a trial dive before buying to ensure we liked it. If you do an excursion, make sure on the day that you are on the correct boat and in the correct taxi as it's easy to be picked up by the wrong person.

I stayed in this resort between 07/18/2017 till 07/23/2017.
We were a group having 5 rooms.
For a long time there was no electricity, then no water, or air condition, in 45 deg. cent. temp.and burning sun, even you can’t use bathroom (no flush) or you can’t shower after you swim , and we spent the night with salty water or chlorine covering our bodies , although they could bought 2 tanks of clean water and rent or buy a reasonable generator to serve 1700 guests.
When we asked for fans the y promised to give one to each room but it never happened..
Of course when you have no electricity, the Water Park stopped working.
Everywhere you go, they would tell you that we have a problem to something out of their control, which is not true, and they think that we paid our money to share them their problems.
I paid money expecting to receive equivalent service, but this never happened.
Of course the last thing you can ask to refund your money as any other respectful resort because I was willing to move to another resort around 3:00 am when the little children started to cry.
Staff is not experienced at all, and they couldn’t handle this volume of occupancy.
All restaurants are crowded and you have to wait for a long time to be seated, and they will not clean your table unless you ask them to do so., all cocktails are terribly mixed
One night I asked to have a late dinner, but they told me it is not for the Egyptians and it is only for foreigners!!,and when I showed them the American Passport ,things had changed(although I didn’t like to do this)..
I tried to talk to the “Manager On Duty” but they didn’t connect me with him telling me different lies ;that he is here or there until next day when I talked to Mr. Moustafa who talks nicely but no results although he offered to give only one person in each room a red bracelet to have hard liqueur and not to all the group.
I called the tourism Police and made a report ,(The police officer was ver nice and understanding) , but they applied pressure on me to cancel after few hours, but a record for this report should be with the tourism police.
I dare if any one could find one word which is not true in this review

I would firstly like to point out that this hotel was never booked by me, we were told 3 weeks before we were due to travel that we needed to change our hotel and was given less than 24 hours to make our mind up on a list of 4, and here is where we ended up......

We have now returned home from this hotel just over a week ago and I can honestly say this is the worst hotel we have ever stayed in. There were several power cuts, days with no water etc etc. No one seemed to want to help, they just sent us 10 bottles of water to wash 3 people.....

The rooms were cleaned daily and I feel we were lucky to have the cleaner we had.

The food was horrid and very samey, there are 3 restaurants and although they advertise as 'Italian' and 'Oriental' please don't be fooled it is exactly the same food in each of the restaurants. I will never make another spaghetti Bolognese again.....

The pool was a complete joke, my children were picked on for the whole 2 weeks when we were there and told they were not even allowed to jump in the pool as they may get the sides wet...... however when the Egyptians come later on in the afternoon and steal everyones beds they are allowed to jump in off the sides, do back flips into the water and not have a word sad to them. We were actually told by a lifeguard 'to go the beach as there are no Egyptian people there....' I have never been so offended in all my life.

The aqua park, the staff are so rude, we had 2 fair children with us who had burnt so we put them in t-shirts and they told them to take them off and I argued as you had the Egyptians going down fully clothed (whilst I understand that is their religion, they should not be discriminated against because we are not Egyptian).

The animation team were non existent and when they came to talk to you they just hovered over you and made you feel extremely comfortable. The 'entertainment' was shocking, we spent nearly every evening in the lobby.

As for the 'all inclusive' well it's not all inclusive as when you're sat round the pool they keep trying to sell you melon, cocktails, freshly squeezed orange etc and it was just draining to keep having to tell them no. They would then still come back and ask again within 10 minutes.

The sales people in the hotel are also relentless and you just could not relax even if you say no they just keep on talking and talking. A word of warning if you are offered the 'foam party' do not go it is not a foam party at all it is a round paddling pool with a foam machine over the top for kids that's it. The fire show was ok however it was over in 20 minutes. Very disappointing and for £10 per person definitely a rip off!!!

The beach was nice and the staff there were so much nicer than the pool.

There was only 2 members of staff that made us feel welcome at the hotel and they are a credit to them and some of the other staff could learn a lot about how to treat people. A big mention to Amhed Sobhy in the restaurant and Mido who does the water excursions. Thanks guys you were great :-)

Overall I would NEVER stay in this hotel again and anyone thinking of staying here I genuinely would say think again, your money is better spent elsewhere. Very disappointed, I feel like I need a holiday to get over this holiday.

With two children i spent a very hot night without air condition and instead of apology we had to deal with their bad attitude we asked for a refund because of the terrible night we spent they refused irrogantly. Not recommended for people because all they care about is the money

Worst hotel i have stayed at!

I have never been so disappointed with a hotel in Hurghada before. We have been to Egypt about seven times so I know what standards to expect, but this was shocking. Our rooms were falling apart and nothing worked. We did complain and were moved to working rooms. Towels and bedding stank of smoke. Looked like the cleaner made the beds and that was it. Never smelt like it had been cleaned.
The food was disgusting and I mean disgusting! As long as you are prepared to eat chips and pasta you will be ok!! All of us (2 adults and 3 children) are still ill a week after we have come back and are now having tests at the doctors. Poor hygiene levels are being blamed! Also had to que for a table for dinner as they couldn't look after the number of guests they had.
Reception staff didn't have a clue and we were giving different information about the same thing by different staff. One member of staff was asleep at his desk in the office!
All staff were miserable and all the, what looked like, senior managers looked like they would rather be anywhere else but there.
We gave the hotel plenty of feedback with regards to what we were experiencing. We spoke to the guest relation lady who made a note and offered us free bowling on my birthday. When we went to have our bowling the staff there would not let us bowl and we had to get guest relations to speak to them. We were then told 10 min wait, then 5, then 20etc. In the end the staff got aggressive with me and reduced me to tears!!
The rules around the pool and waterpark are ridiculous and my 10 year old was not even allowed to jump in the swimming pool. Funny how all the Egyptians were allowed too!!!
I am totally disgusted with this hotel and think the right thing to do would be for my money (which was a lot) to be refunded!!!
If you have booked this hotel, please ask your agent to change to another. I promise you this is a terrible hotel and your money will pay for a week or 2 of hell!