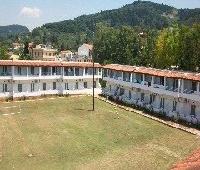 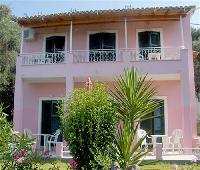 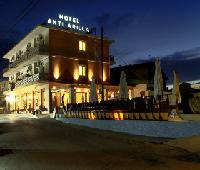 We stayed 12 days at this hotel.
Positive:
*Good position for excursions: Sidari, Corfu, Paleokastritsa, Liapades, Pelekas, Canal d'amour, Afionas, Cape Drastis...
*nice beach in front of the hotel
*nice swimming pool with sunbeds and pool bar
*kind and helpful staff, cleaned rooms
*interesting price if you need just a shelter to sleep and you want to discover the island travelling during the day

Negative:
*no nightlife
*poor all inclusive: there is no big choice of the menu always the same without dessert.
*the hotel is full of rude Slovak and Czech people
*hairdryer missing from the room
*after 21:00 no more al inclusive, of you want to drink you have to pay extra fee...
*no lunchbox given (just for those who participate in the excursions organised by the hotel)

Room was small, but okey, shower was not very pretty, but we were mostly out. Air condition on each room had an plastic bottle, and this bottle was two times per day full of water.
All inclusive was really light, but it was enough for us, we have free drinks until 9.00p.m. after at 8.30. p.m. there was "old man barman" who do not want to give you anything. Everybody could drink only one drink, when somebody wanted drinks for whole family, whole family should be there, they could not wait outside on the terrace.
Old man barman had stupid dog, which wanted to bite everybody, me, my sister, my friends, old woman, so everybody who comes to close and wanted to play with him.
Second arrogant man was by pool. Maybe he was brother of old man barman, he was very similar. At 6.30. p.m. he wanted to close our sunshades. He stopped young mum playing with 4 childs about (5-8 y.o.)and throwing them in to water.
Now food. Breakfest were not very interesting. Eggs were expensive on the island, maybe thatś why we had eggs only 3 times from 7 breakfeasts. Lunches where almost each phantastic. I love vefetable called gumbo! (specialty there) and there were also greek salat ( but olives where small and with bonelets). Main food was meet (turkey, or beef or chicken, almost everyday fish tasting like pangassius, but twice we had somthing like shark) So food was good. But the dessert was from 13 meals (6 lunches and 7 dinners) only twice. Once very sweet cake and secondly eggsnow with sugar. On other chances we had fruit. Like peaches, watermelons or yellow melons or grape.
Drinking- youces were sweet, disgusting water without more than 1% of fruit, I think.
See was beautiful, but after storm it was whole week full of algae. Big waves were confusing, becouse in 2metres high, or bigger waves you can play, but not swim.
Agios Georgios? In Slovakia we say: " zdochol tu pes" we were bored, Four hotels, Five tavernas, Five souvenirshops, one bowling and it was everything. But we do not wanted to go to Saint Tropez or something similar, so it was good. But there were not even a real foot trail.
yeah and wifi, sometimes ( about 5-6 hours per day it was off, like somebody was playing with it and laughing on everybody, who can not even send an email!!!)
Rent a ship! But reserve it firstly. It was satisfaction at last day of our staying there!

We stayed Sept 2014. There were five of us all different ages from fifty to eighty we had sea facing views in the main building, yes the furniture was older but the rooms were light, clean and airy. We found the beds a bit hard but that didn't spoil our stay. The staff were friendly and welcoming, the pool lovely and wonderful views. We had hired cars as we knew by looking on line that there were poor transport links. As for the damaged boardwalk that was further along the beach and looked dodgy so we avoided it and walked on the beach. The only downside was the noisy banging of doors and loud conversations of other guests who weren't British, who were really rude and never smiled but that isn't the hotels fault. The breakfast was OK. We found it a quiet peaceful setting and had a very relaxing time, lots of lovely tavernas and helpful staff and lovely swimming pool perhaps more suited to older travellers than families.

Nice but very quite beach hotel

Well located opp beach but only a handful of tavernas which you have to reach via a very unstable pallet path my friend fell and so did many others. Hotel dog vicious saw it attack people and kill a kitten . No entertainment at night poor food breakfast of bread and cheese cornflakes or yoghurt, no daytime activities and one bus a day to Corfu standing room only and only way to get to nearer villages is by taxi which works out to be very expensive . No life guard at pool and no doctor or pharmacy in village nearest one is one hr taxi ride away . Cockeral wakes you up at 4 am and problems with showers .

I don't recommend this hotel to anyone!

Hotel deserves max. 2 *! The room could be better if not smelly musty furnitures, probably never cleaned air conditioner and terribly uncomfortable bed. You never know when and for how long will be the hot water. Cleaned daily but towels changed only once and on special request. The food is horrible! Breakfast is the same every day: light / dark bread (the only thing that was tasty), creamy white cheese (like a thick yogurt), 3 types of jams, sometimes honey, cheese and mortadella completely uneatable, from time to time appeared tomato or cucumber. 3 times were also hard-boiled eggs. Dinners are mostly beef in various ways: to a greater or lesser piece, stew, stew with carrots or some other variation on the beef. One occurred chicken, lamb, Moussaka and spaghetti. The dinner is a repeat of lunch. Vegetables are cabbage, alternating with lettuce, sometimes tomato and cucumber. Snacks served at the pool bar between meals is pizza with mortadella heated in a microwave, toast with cheese and mortadella or sandwich with cheese and mortadella. All UNEATABLE, so either buy yourself a snack at a local bar, or go hungry. I do not think alcohol may have been a more watered down. All inclusive option is generally rather little resemblance to All. And for the last 3 days we ate outside the hotel, because our stomachs were fed up.
The only attraction in the hotel is a pool.
I do not recommend this hotel to anyone!