-the Newly Opened Elegant 3 Star Amber Sea Hotel Invites You to Spend Some Days In Harmony With Nature. Surrounded By pine Forest And Within Close Proximity To The Sea Yet Still just A Short Walk To The Main Pedestrian Jomas Street The hotel Offers A Perf 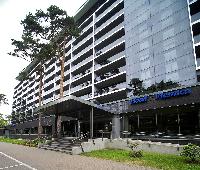 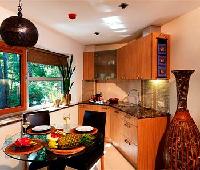 -the Newly Opened Elegant 3 Star Amber Sea Hotel Invites You to Spend Some Days In Harmony With Nature. Surrounded By pine Forest And Within Close Proximity To The Sea Yet Still just A Short Walk To The Main Pedestrian Jomas Street The hotel Offers A Perf

Doesn't live up to pictures and reviews

Visited in July with wife and 8 month old. We chose the Marina suite with 2 terraces (at least hose them once in a while so they are not dirty). Supposedly the most expensive rooms are the ones used the least and kept in the best condition. Wouldn't want to see other rooms. The room had seen better days and should be renovated. Also, do something about the echo in the rooms.
The surroundings, however are nice and peaceful but so is the whole Jurmala city.
Also the elevator made weird noises and "made jumps" while moving. Should check up on it since it seemed like a safety hazard.
The worst thing was the "restaurant". Seriously. Poor excuse for a roadside cafe not a supposedly 4 star hotel.

Booked the Amber suite as a newly married couple with two children. The suite is dated and needs a refurb soon. Curtains hanging from rails and bath parts loose/broken. For 230€ a night this wasn't expected. The staff were friendly and helpful although some of them struggled with English a little. The suite has a lovely huge terrace which we didn't use due to poor weather but would be great to sit and have a drink in the evenings.

Our friends booked a double terrace room which was on the '1st' (read ground) floor. Their room cost 159€ a night for B&B. That room was absolutely tiny and you could barely call it a double albeit there was a small double bed in there. The weather had turned a little chilly and there was NO heating available in their room. They asked at reception for extra pillows and were told they would have to wait until the next morning as none were available! I presume the problem was that reception staff had no access to pillows once housekeeping had left for the day.

As both rooms were booked by me I made a point of complaining and wanted a reduced rate on my friends room when they were checking out. Unfortunately they could not offer this and said no manager was available (9am in the morning). I begrudgingly paid and said I will be complaining to the manager Elena.

The 'restaurant' is more like a canteen with very limited menu. Breakfast is basic but ok. Staff don't seem to be particularly attentive and like sitting behind the till.

To summarise I would not recommend this hotel. The prices are high purely because it's in Jūrmala which is all very overpriced.

The Russian New Wave music festival is no longer held in Jūrmala and I think that hotels like this which are overpriced with poor service won't be around much longer. Of course the Russian tourists may be used to this level but as UK travellers used to receiving better service we were not impressed much!

I visited the spa only, had a massage I will never forget. Usually after a relaxing massage I want to rest but this made me so energetic I went straight for a long walk. I recommended the same treatment for my husband and he liked it too. The handling was really thorough and professionnally performed. The only minus was that there were two places in the same room with only one dressing-room. So I entered there and there was already one male there and I had to leave my clothes beside his in the dressing-room. The personnel handled the situation very discretely though.

This hotel is a very peaceful place. Surrounded by nature and still close to Jurmala center. It has a comfortable garden to sit and relax. Staff is extremely friendly and helpfull. If you want to go to Jurmala, you can rent a bike from the hotel. Walking is just a bit too far.
The rooms are good. We had a room with terrace, so you can sit outside. The room is quite small and has no airconditioning. You can open the door to the terrace, but when it is hot an airco would have been nice.
Breakfast is good, nothing out of the ordinary but adequate.
If you want a drink, there is a fridge in the lobby from which you can buy beer, wine and softdrinks.
We enjoyed our time here.

Interesting hotel set in the pine forest. Superb location as regarding the excellent beach and within easy walking distance to the lovely Jomas Street. It lacked a little in the way of 'atmosphere' so indeed recommended if you wanted peace and quiet. I am definitely going to return.