Americas Best Inn And Suites Have Become Known For Comfort, value And The Friendly Attention Of A Welcoming Staff That cares. At Americas Best Inns And Suites, We Keep Your comfort In Mind And Offer What You Truly Want - Quality accommodations With A Complimentary Breakfast Each Morning - all At The Best Value Possible. We Are A Pet Friendly Hotel. . 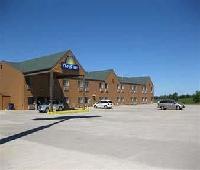 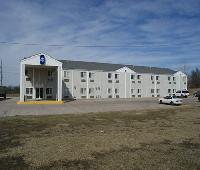 Americas Best Inn And Suites Have Become Known For Comfort, value And The Friendly Attention Of A Welcoming Staff That cares. At Americas Best Inns And Suites, We Keep Your comfort In Mind And Offer What You Truly Want - Quality accommodations With A Complimentary Breakfast Each Morning - all At The Best Value Possible. We Are A Pet Friendly Hotel. .

MUCH better than I expected!

My wife and I were looking for accommodations for a last-minute 3-day weekend trip. We've been to the area twice before and stayed at the Budget Motel in High Hills, but they had no more rooms available, so I booked this room BEFORE reading all the reviews. When I read them I was scared I'd made a BIG mistake....but instead, we were very pleasantly pleased! The manager was very nice at check in, and the room met all our needs. YES, the some of the wall paper was peeling at the seams in the bathroom, but the room was PERFECTLY CLEAN, had NO "musty" odor as reported by other reviews, nor were there any stains on the linens. The 27" TV and Fridge and Microwave all worked FINE.. the WiFi was open and fast, the king-size bed had a pillow-top mattress and was very nice, and the water was good and hot....Some people might be turned off by the rather run-down appearance of the exterior of the building, but that does NOT reflect the condition of the rooms. Yes,one of the two drawers in the wall-system did have broken tracks, and one of the chairs had a roller that liked to slip out of the bottom, but again, not was not a big deal. If I were to WISH for any improvements: a wall-mounted "reading light" over the bed would be helpful as well as an electrical outlet and night-stand on BOTH sides of the bed, but I'd anticipated the need for outlets and brought a power-strip so we could plug in a laptop computer and two cell-phone chargers. The manager told us that once the fall tourist season ends, they will be refurbishing the rooms....flat-screen 42" TVs, etc. The ice machine was pumping out lots of ice (someone reported it was broken), and the vending machine was unplugged and empty, but there's a McDonald's less than 1 block away. The manager said there was a breakfast included....we'll try that tomorrow morning and report back.

If I could give it less than 1 star, I would

Travelers beware! This was a disgusting hotel. The outside had absolutely no curb appeal. Run down.
Room was awful. Stains on the ceiling, curtain falling down, the bathroom was so gross. The toilet had stains around the bottom, the 'white' towels had yellow stains on them. The coffee maker looked like it hadn't been cleaned in months and the water pitcher had MOLD growing on it. I would NEVER stay here again. Pay more money and go across the road for a nicer hotel.

Would only stay here if I had no other option

The manager was friendly enough but the room had issues. The TV was not plugged in as the outlet there didn't work. The outlet behind the bed was completely hanging out of the wall, blue box and all. Hey didn't use fitted sheets so when you woke up the next morning, you we half on the naked mattress and half on the sheet. Great jet run but no switch in which to use the jets.

Day 4 of Our Adventure

We were too tired to make our goal of Saint Louis so stopped here because this is a chain we trust and it's economical. Easy check in, next to McDonald's and Dad's Restaurant. The room is clean and beds comfortable. The bathroom has a sloppy paint job on walls, and the floor in the corner behind the door is dirty. Being bug shy, I checked mattresses and sheets, and they all seem very crisp and clean, and we're way too tired to leave but will let the front desk know about the bathroom.

Front desk attendant was very friendly but the hotel itself was awful! Very old hotel that needs some TLC. The sheets on the bed were stained and the room smelled musty! You do get what you pay for! Next time I think we will opt to sleep in the car.