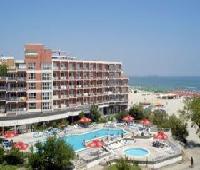 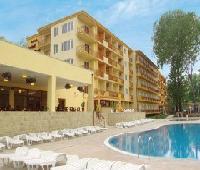 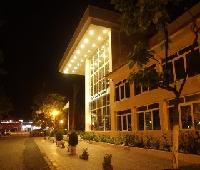 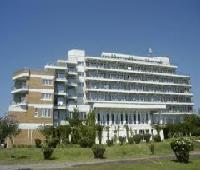 The room is large, the balcony is minimal, but with a beautiful view of the sea. Bath accessories minimal. Breakfast minimum, with basic elements, but with only one coffee machine.
It is close to the sea.

Really liked the staff here at front desk, cleaning ladies and restaurant. Everyone went out of their way to be helpful. The restaurant had a very good buffet for dinner and breakfast and I was quite pleased with the selection and price. The hotel room was something else as the bed was about 8 inches off of the ground and I was unable to get out of it without the assistance of my wife. Also the pillows were hard foam and very uncomfortable. Did have a great view of the Black Sea. Again it is like so many of the Black Sea hotels, flash from the outside and need of work inside. Read some bad reviews but did not find those conditions while I stayed there. Again, the folks who work there were super and tried their best to make us comfortable but overall this is just an average hotel which seems to be standard at the Black Sea.

good value for money in Mamaia

Good location for families - hotel is right on the beach, with playing facilities for kids. Sea water is not deep at all, so kids are safe.
Good location for couples - in North Mamaia close to fancy night-clubs.
Rooms are decent.
Don't book for all inclusive as there are plenty of restaurants and terraces in the area

The hotel was more or less. The room was fairly clean but basic. No beach towels available. The all inclusive package is an overstatement. The food choice is limited and carelessly attended. Not enough tongs for the food so the clients would pick the tongs from other food. There wasn't any tong for the bread. When refilling the food line even the waiters would mix the tongs. The waitress were rude unfriendly and their uniforms well nobody would check their uniforms. The skirts were tight and short the shirts tight also. You feel like you're in a taverna more than you feel in a hotel restaurant. One time we asked for well done eggs for breakfast. The lady told my husband that they won't do it and we should get some omelet if we don't like the fried eggs.
All in all a poor experience.

I booked this hotel via booking.com where it was rated 8.4....... The star rating is 4* which if it is I think the owners are the rating people as it doesn't even come close.... I made the ridiculous mistake of booking all inclusive in a resort full of good restaurants , fortunately it was very cheap and now I know why.....
We arrived after a 650km round trip from Bran Castle which was spectacular... It was 9pm when we checked in with a receptionist who had no clue what was going on.... She 1st thought the booking was for 1 person when my confirmation clearly stated 2..... Then they denied that we were on all inclusive again despite this being on the confirmation.
We eventually git a room and we're told that dinner was in their sister hotel the commodore next door. We went to the room and dropped our bags off and ran out to meet the 10pm curfew on dinner........ dinner was hilarious we sat down in an empty restaurant and were given a beer, we couldn't see the usual all inclusive buffet so expected a menu.... Only to be approached by the waiter who simply said "pig or chicken" I just laughed and decided on chicken..... We then got a meal of, deep fried mozzarella which was average, my chicken was just grilled with chips and ice cream for dessert.... In fairness the food was edible but hardly what we expected......
Returning to the room it was clear the hotel was in need of work, orange worn carpets and scuffed walls, lift buttons drawn on numbers.... The bedroom was ok in terms of size but was very bland and basic. The bed was not comfortable and a bit lumpy, bathroom and fixtures were old but worked although the toilet intermittently flushed itself. The only plus point was the air conditioning which functioned perfectly and was very welcome given it was 30 degrees outside.
Breakfast was again in the commodore hotel and was very basic and gad not been replenished... Not great quality and randomly no butter....? The pool area is ok, however no towels available for pool users, a common facility in most resort hotels around the world..
The biggest glaring issue appeared next , where was the bar? No bar anywhere to be found.... If you want a drink you have to go into the restaurant and ask one of the staff sat smoking at a table. They reluctantly offer you a beer...... Don't ask for anything else they done have it....... All inclusive .. I don't think so..... I asked about vodka, whiskey, etc and they produced a plastic 2l bottle with different coloured liquids in them with on labels written in brio what the contents could be... I wouldn't risk it to be honest as god knows what it actually was.
Lunch was again in an empty restaurant and this time no choice just a set menu... This was soup (actually delicious ) Pork with mash and a side salad (tasted ok). We didn't bother with dessert... By now I was ready to go back to Bucharest....
We went out for dinner and discovered a vast array of amazing restaurants and hotels further down the strip. We ate at Hotel vega which was the only 5* hotel in the resort and it was great and not too expensive. It had a sky bar called the violet room - worth a visit at night.
The resort itself is a bit like the land that time forgot...... Some nice placed on the boardwalk but a bit tacky in places... Much like Benidorn. The resort was clearly gearing up for the summer as they were building beach bars and clubs everywhere... We went to a couple of them that were open and they were pretty good to be fair.
All in all this was a disappointing trip made the best of by 2 creative people who are actually hoteliers... We found the fun and ate and drank well as all hoteliers will.
Take my advice stay elsewhere and avoid this hotel at all cost I implore you! The best part of this stay was leaving..... Thank god the weather was good.