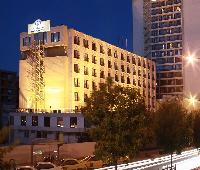 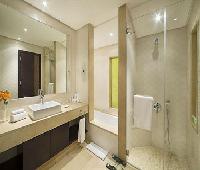 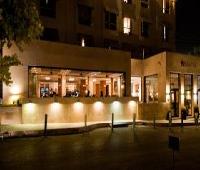 The carpet in the room looked like it needed to be updated, but everything else was clean and comfortable. I’m typically a sound sleeper, but I often heard the call to prayer in the wee hours of the morning (around 1:30 am and another at 4:30 am) from a nearby mosque and it did keep me awake. We spent some time at the pool and scrounged up four of the six available lounge chairs. We were told that the pool was open till 6pm, however the first day it closed at 5pm and the second day it was already closed when we got back from our tour at 4:30. The air-conditioning in the room worked fine. The restaurant was a disappointment. Dinner didn’t start at the posted time and we had to go to the front to ask for drinks due to a lack of service. The dinner buffet was limited and didn’t sit well. The breakfast buffet wasn’t much better – last night’s corn was a part of the scrambled eggs the next morning. We wandered around the surrounding area and bought some water / juice / snacks at the nearby grocery store which helped to supplement our lack luster meals. As a non-smoker, the lobby was not an enjoyable space to sit and relax in as other guests sit there and smoke. This hotel was chosen by our tour company but I would not choose to stay at this hotel again.

The food is awful. Breakfast is included, but less and less was offered as the week progressed.

One if the land route into east Jerusalem is via Amman King Hussein Bridge.

October was a good month to be in Amman. The weather was nice as its it was autumn. Sky was clear and sunny.

We have a friend who lives in Amman, Majed was on hand to take us around this nice city as well as some nearby tourists attraction in the North where there is an Old Palace high up
In the mountains called the Arjun Castle.

Majed took us to a nice Iraqi restaurant that served us nice grilled fishes too.

The hotel is very poor in its services and location, it is not located near to the places for sightseeing and the services are very poor. The staff can barely speak english, and the hotel provides only the basics for stay. There is no way to relax as the neighborhood where it is located is always busy. The time needed to provide any service by the staff takes ages and sometimes they are not delivered at all!!!! highly not recommended.

We saw the most beautiful sunset from the room and the room is clean and neat. The food in the hotel is also ok. However, the wifi in the hotel is quite spotty and it's difficult to download emails and connect to WhatsApp.