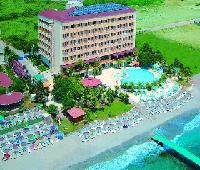 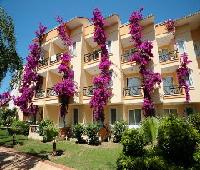 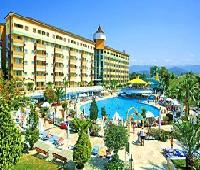 Myself and 3 friends have just come back from a 4 night break at this hotel and must say we had an amazing time!!!!
I was put off after reading the reviews and somewhat nervous as to what I was walking into.
For starters yes, we were the only English people at the resort, mostly German's and Russian's, but we managed to get by with deciphering the hotels staff and other guests broken English.
The rooms could do with a make over but they were pleasant enough and in all fairness, your on holiday, you should be out of the room anyway!!!!!
I had a beachfront view which put a smile on my face every morning I woke up.
The food was good, a mixed variety every lunch and evening meal, my only gripe would be that more of a variety of food for breakfast would be good.
Staff were happy to help in any which way they could.
Free wifi access is available in the lobby.
The hotel is located close to Sisha cafe and shops.

I will defo be visiting again in the near future :)

Avoid if you are British

Just returned from this hotel, not happy at all, know one speaks English but the Managers wife (She was very nice but not on hand when needed!!!) All quests were Russian, German & Turkish I was the only English person their!!! Food not good, Rooms very basic, Mini fridge in room but nothing in it for all inclusive!!! you even had to pay for water, beach towels & safe box. Only thing happy about was the weather.

Anyone from the UK or Ireland should give this place the biggest swerve possible. No one at the hotel speaks English , from the reception desk all the way thru to the "entertainment" team. Try playing bingo when the numbers are called out in German, Russian ,Turkish , Uzbekistanie - in fact every language apart from English!
Where to start ? I've never written one of these reviews but feel compelled to do so as our holiday was so shocking.
Firstly the free wifi, or as it should be titled - the 10 euros a day wifi , poor is an understatement - don't bother with it as it's shockingly slow and disconnects you every 6 mins.
On to food, was it food ? That is the question ! Never been all inclusive before and lost weight ( around a quarter of a stone in 2 weeks ). Choices for breakfast include boiled egg, cold fried, watery scrambled or omelette (depending on the day) with if your lucky dried up hot dog bits, bowl of unlabled slop and another bowl of unlabled slop with no clue of what it contains. Dinner was equally as poor forcing us to eat out every few days to starve of the hunger !
Ice cream ? None available
Supplied water bottles/ cartons ? No chance, take the 10 min walk/ stagger up to the shops to avoid dehydration.
Bar with the all inclusive drinks ? I say drink, I meant watered down beer, rank gin, whiskey , half reasonable vodka and house red / white - and that's your choice , ask for anything else and it's extra ( like pretty much everything else in the place). The soft drink stand could do with more syrup added to the carbonated water to make it taste more like it should as opposed to , well carbonated water.
Rooms are pretty dated with a/c to be fair but ours kept tripping the electric 2 or 3 times a day so on the 2 nd day I found where the fuse board was and kept resetting it myself to save bothering the on site maintenance guy. Bathrooms again pretty dated and in need of refurb.
Swimming pool pretty small with sunbeds crammed around it pretty tightly. Water pretty unclean and could do with bit more filtering/ changing .
Sea front position sounds pretty good but the beach consists of solid rock which has to be climbed over to reach the sea water, doesn't sound to much of a hinder acne I know but the waves are pretty sting along with the current which would probly result in broken legs and damage cruciate knee ligaments ! Perhaps do what other hotels along the same stretch have done and cut out the rock perhaps - just an idea but it works for them .
Mmmm reception/"security"staff, nice bunch , again non speak English and seem to enjoy threatening the kids, of all nationalities , for er being kids and playing enjoying themselves :0(
Check out time to clarify is noon, not just to get out of the room but also the hotel. So apparently if you then have to wait 6 hours or so for transfer you do it outside in the 37 degree heat and dust
The Turkish baths and massage are ok as is the woman who makes pitta bread up by the bar all day , best food in the place !!
So to summarise, avoid the place at all cost

All in one Place

This hotel is not perfect, but has many advantages. Sea entrance, entry to swimming pools, bar, spa, it's all quite close to the hotel or the hotel. We were here back in September 2010 and always eager to cite this stay.
Food was varied and there was no shortage 10 minutes before the end. The advantage of the hotel at that time was that there were no Russians.
We had a room facing the country, we did not need air conditioning. Rooms facing the sea have to use air conditioning all day and also at night, because here the sun shines from dawn to dusk.
In this hotel I would like to come back sometime.

We was in Anitas hotel from 5th of May 2015 for 10 days. Wether was very good temp. 26 till 30. hotel near beach but on the beach is a lot of concrete and is very difficult to walk. we was have sea view room - extra pay 40 Euro. Generally german and russian people. They didin't speak english. But staff very friendly, cleaning everyday our room. all prices in Turkey in Euro. 10 Turkish lira was 2.5 £. Very cheap . in hotel is spa (prices from 30-90 Euro), hairdresser (cheap). internet cost 3 Euro per day. Cigarretes like Marlboro cost 2.5 £. But if somebody like to buy more cigarets in Antalya airport LM cost 1.8 Euro, Marlboro 3.2 Euro.
Generally too loud music, poor animation, food many times cold. who go there should have ear plugs becouse cant sleep well. very nice holiday but we dont came back.