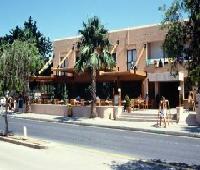 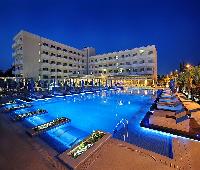 Me and 2 friends came here as a girls holiday, what I will say its close to the strip as in stones throw and its not horrendous, however its massive literally huge so there's so many people walking about, people are knocking on your door constantly the pool is so crowded its actually intimidating and there's constant fights.
Our room wasn't terrible although the bedding was questionable as it didn't actually cover the bed, the doors did have holes in and botched up surfaces. Its defiantly not luxury. Also there's some really odd people that just invite themselves to your room for drinks? This didn't just happen to us I knew 3 others who also said they'd been in weird situations with other guests too.
Wouldn't go back but if its your first holiday and up for meeting oddballs that's the one to choose!
Also music is played allllllll day.

We came here in June and the staff were lovely, our room as good we also had a very big balcony area.

There was a few quiet pools and 1 main pool where there would be entertainment for 18-30's. Meaning they play music and do games.

I would definitely recommend coming here for a girl/ lads holiday!

We will be returning next year.

I can blame no body but me only. I did a great mistake when I was in a hurry to book my stay one day before my flight.and I thought by seeing the map that this hotel is on the beach, I know I was stupid. Anyways, I can find no words to describe my surprise and shock when I arrive to check in. hotel is full of teens on school break, reminds me of spring break in south beach miami. creazy and loud and drunk all day.hotel room were the worst I ever been, I felt like a pig living in a filthy farm. they charge extra for A/C in rooms, and WI fi and safe box. I could not sleep at all because of security worries. I departed next day though I booked 4 night. so I dumped my money into a toilet. so if you want to ruin your vacation then take a look at that hotel. oh by the way I attached a foto of the door so you can see how secure you feel when you inside, especially rooms are in the open like a motel, and away from the reception, and anyone from street can come to your room and knock it open.

The hotel seems to have difficulty knowing wether it should cater to young people or families. I seen crazy young people mixed in with 2 year olds. Both pools were filthy.
Children's pool not cleaned in a week I was there. People were using it to clean their feet
Around pool tiles were slimy with algae
There is a second pool in the complex which didn't look too good
Receptionist told me not to go near third pool because of "What they throw in It"
Non renovated rooms were horrendous. I paid £480 for the week hotel only at that price I expected one of the renovated rooms as the average price of a weeks apt In Anthea is around £250
The whole top floor of Anthea has been renovated to a good standard and to 3 star . The shower toilet is behind see thru glass however .. Not everyone likes to see someone on the toilet or showering renovated or not.
I got a horrible little one bedroom apartment with black mould in the bathroom, dirty toilet musty damp sheets and dirty towels overlooking a side street. The noise at night from the refuse trucks people shouting quads and general noise was so deafening I had to close the doors and face the heat ( I can't sleep with aircon switched on due to having a small child with us)
We changed to a renovated room and we were told it was at no at no extra charge due to my complaint despite paying almost 500 for 7 days anyway which is more than what they usually charge . Room was nice, balcony huge. Full size fridge, hot plate and cutlery ect. Pots and pans dirty . Cutlery very old. Thick dust in cupboards. Shower good ( but see through ) decoration was nice
Hotel is actually huge, walkways are a maze and no signage telling you what way you are going however. Anthea complex a large one.
Maid only came once for the week we were there when they are meant to come twice . The floor was often dusty and Sandy and if they can't clean often then they could at least provide a broom.
Lifts were filthy. Hold your breath .
Towels always smelt musty and I couldn't dry myself or my child with them . They stank. So took them to the launderette
Sunbeds around the pool old torn and broken and dirty with holes
Food was awful ordered a jacket potato with bolognese it arrived with a pool of defrosted water and didn't taste nice
Prices were not any cheaper than outside of the hotel in fact they were quite expensive for what they provided . Which is microwaved frozen food.
Lool music extremley loud i liked the music alot but it's not suitable for kids. Playing tracks such as "What the fu**" at full blast with repeated f words at full blast isn't appropriate really. Id defo come back here with mates but not my child. Travel agent said was ok for families ...no it is not.
Staff were friendly and accomodating
On a plus note they are going to renovate the rest of the hotel next year and they do need to consider wether they want to target youngsters or families. On more than one occasion I witnessed chairs and tables falling into the pool .
Rooms cleaned twice a week Wi-Fi is 2 euros an hour air con is 8 euros a day
Their bar restaurant on outside bit was always empty and a bit lonley and sad looking . Did not feel to sit there and mooks like nobody else did either
Much better places to go. Ive provided photos of both rooms. Ask for a renovated one during booking

We arrived here and the tops of the tables were a little dirty. We complained and they couldnt do enough to help us. Rooms are basic but u dont go on holiday to stay in the room all day. Air con is €8 a day and wifi is €29 a week. Room is cleaned every 2 days with fresh sheets and towels. Night staff are a little ignorant so if u have a problem try and wait till morning. Dan the scene rep is very helpful and a cheery soul. Need anythibg then he is your to go to man