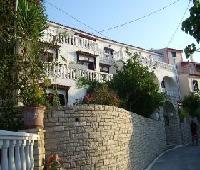 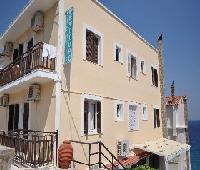 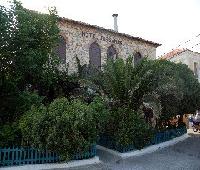 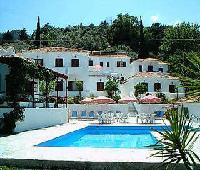 Dream holiday on a budget

Anthemis Rooms is a budget hotel on the hillside above the cute greek village of Kokkari. The location means GREAT views! And the nearest beach is only 2 minutes walk away. The rooms are simple but the beds are comfy, the rooms very clean and the landlady is a gem. You feel right at home! I would happily come back again.

We have stayed 2 days in Anthemis. We had fantastic times. Fotiini and Hristo are really good and very very kind persons. You do not feel as a hotel and pension guest there; you really fell as a family member. Very Clean. Very good wifi. The only thing is difficult to find. But it is hidden gem it is very normal in greece:)))). When ever I go to samos I wil stay in Anthemis again!!!

We stayed at the Pension Anthemis Last September (2012). We had a fantastic time the holiday was just perfect, the rooms are Basic but very clean, Breakfast was Simple fresh bread from the Bakers, little Jams and good strong Coffee. The views from the Balcony are lovely out to the small Harbour and the open sea, great to sit there of evening sipping a glass Of ice cold wine!

The owners were very Helpful throughout our stay, when we arrived our suitcases were taken up to our rooms, there are steps but not too bad for Greece. Overall we have had a fantastic holiday and could have stayed for two weeks, felt sad to leave on the last day.

I would have booked to go back to the Pension Anthemis this year however Thomson no longer have the hotel on the books, nor can we get a flight from Manchester with them it appears we
have to fly to Gatwick. Gutted!!

Overall we had the best Holiday we have had in a very long time and we have visited many of the Greek islands and mainland too.

A room with a view

Had a fabulous week staying at the Anthemis. I do agree with the previous reviewer that Thomson should not sell this accomodation as a hotel. In my opinion the accomodation is a room where the owners supply a basic but adequate breakfast. The entrance to the accomodation is up a fairly steep hill, so not good for people with walking difficulties. Once inside there are six well sized rooms, all with balconies and an excellent paroramic view of Kokkari. The room was nicely furnished with twin beds and a fridge. Rooms were cleaned daily, except sundays. The shower is greek style, there was always hot water, and the towels were changed regularly. Breakfast consisted of coffee/tea, orange juice, a roll and jam. Sometimes the owners provided fruit from their tree. The owners were very helpful and took our suitcases back to the pick up point on the last day. To sum up, great accomodation and views, very quiet and relaxing and good value for money. A great location, a few minutes walk downhill/steps to Kokkari harbour.

I booked this hotel as part of a Thomson's package. I have stayed in different types of accommodation all over Greece and am aware that hotels in Greece cannot be equated in terms of star ratings with those of Northern Europe. I am also quite profficient at reading between the lines of travel agent's materiel. Throughout the booking and all other proceedures, Thomsons referred to this accommodation as a hotel. We were expecting something fairly basic which was fine; had we been able to find self-catering accommodation, we would have booked that. There is however, basic and basic. Anthemis took basic(in terms of a hotel) to a new level.
The holiday did not start well with a transfer that took approximately an hour and a half. We had not expected the coach to take us up into the village but neither had we expected to have to climb into the back of a pick-up truck(I am almost 70)and sit on the floor with our cases.When the truck stopped, having with difficulty extracted ourselves, my nearly as ancient husband had to carry a case up a steep flight of steps, up a slope and into a door in a village street. There was no indication that this was a hotel-no name and no suggestion of any connection with Thomsons(further emphasised by the fact that no representative of Thomsons came anywhere near the place durin the 2 weeks we were there).Once inside, the luggage had to be carried up a further flight of stairs and along a corridor. By the time we reached our room we were not only exhausted having been up in the early hours to get to the airport by 6.00am but also pretty traumatised. This was incidentally, our one and only contact with our host;we had to drag our own luggage all the way down to the main road when we left.
The room was of adequate size-the info had told us there would be two single beds with room for a third fold up bed. Had a third guest wanted to sleep on the balcony, this would have been accurate. the balcony was of good size and had the sun all day long which was lovely. There was a fridge in the room and bedding and towels were changed every other day. the room was cleaned every day by the lady owner who was very pleasant but did not actually live on the premises.
The room contained no tea or coffee making facilities, no hairdryer, no safety deposit box, no air-conditioning, no toiletries-not even a tiny piece of soap. Had Thompsons described it as a village room, I wold have had no complaints. The bathroom was of adequate size but we suffered wet feet when we so much as cleaned our teeth as the wash-basin leaked. the shower curtain stretched half way across the room, encompassing the toilet and towel rail. The shower tray was extremely shallow and the shower itself had to be hand held. This resulted in the towels-there being no hooks on the door-the toilet roll and all clothing having to be left outside the bathroom .After showering one had to paddle across the bathroom into the bedoom to towel and dress outside. The bathroom then remained fairly unusable for quite some time till the majority of the surface water had drained away.
To get to where the owner lived and to have beakfast, one had to exit into the village street, go down a slope, down the steep steps, round a corner into another street and up into the owner's back-yard/terrace where there were 2 small plastic tables. The accommodation had 6 rooms so I do not know what happened if more that 2 couple came for breakfast at the same time-we were the only occupants at that time. Nor do I know what would have happened when it rained-which it did. Breakfast consisted of a glass of carton orange juice in an island boasting more orange trees than people, a jug of coffee and bread and jam; no fruit, no yogurt, no eggs,cheese, meat, just bread and jam for 14 days. As this was neither healthy nor frankly acceptable, we purchased a kettle, cups, dishes, cutlery and a tea towel. We then essentially self-catered as far as breakfasts were concerned.
If this accomodation were to be equipped with tea and coffee-making facilities, basic cutlery and crockery and a micro-wave, it would have made perfectly acceptable self-catering accommodation but a hotel, it most certainly was not. For Thomsons to promote it as such was misleading in the extreme.