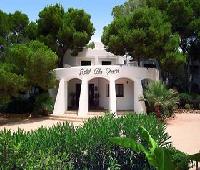 Went on a lads holiday, July 2017. The hotel is BUDGET! you can deal with that, its cheap and for most me included its just a base. What you can't deal with is confrontational rude security staff. We had issues with them all day by the pool. That night we had our room burgled and the entire safe taken from the wardrobe (stuck in with a blob of silicon) passports, phones, money, all gone. The front of house staff just shrugged and the security just smirked. No Apology, no help all of a sudden know one speaks English... you get the picture. The whole thing reeks of an inside job. eventually the police came but could do nothing that night - spent the rest of the holiday getting police reports and emergency passports at the embassy. Avoid, Avoid, Avoid.

We were a little hesitant going to this hotel just in case it wasn't nice but we were pleasantly surprised!
The rooms are really spacious and get cleaned regularly. The shower doesn't have much pressure and goes hot and cold a lot but it's not bad to deal with. Free air con and wifi is a massive plus! The hotel is a noisy hotel sometimes but it's to be expected for a budget hotel in Ibiza. We were woke up a couple of times but I suppose it's who else is in the hotel with you how loud it'll be. Only down side to the room is that there aren't many plugs in the room.
Pool area good and sun beds always available. The pool bar was nice too.
Location is amazing, very close to cafe mambo and the sunset strip and also really close to the westend (about 5min walk) but it's far enough away to not be disturbed by music etc.

Overall if you want a clean budget hotel with a good location then this is a good hotel!

I went to this hotel last year and was perfect for what me and my friend needed clean , cheap and close to everything!
I've just got home from my 2nd visit with another friend!
We had a awful time!
First the room wasn't very clean when we first arrived.
Our room wasn't cleaned for 3 days which I complained about and the next day the lady left towels and toilet roll that was it !
Still sick on the balcony.
So I go down to The lady on reception which couldn't understand a word I was saying! She could no communicate at all!
All I wanted was clean towels and toilet roll!
So I got the nice guy from the bar so he could translate what I was saying which he was embarrassed that it was not cleaned for 3 days!
Next day was cleaned and sick was still there then the cleaner came and like mopped the sick and smeared it around the balcony which was horrendous! We could not walk with no shoes!
Then the day we where leaving late that night, as we where packing we woke up to two huge cockroaches coming behind the bed! So we opened our front door to the cleaner and she was trying to kill them for us ! So glad we where leaving that day !
Never go back !!!!

Stayed here from 3rd-10th July 2017 with 3 friends. The hotel was clean and had very good wifi and air con (free). The rooms were cleaned everyday and the maids were really friendly. The kitchen area was great and they even gave you a washing up sponge (you'll just need to buy your own soap). Unfortunately the shower wasn't so great, it would go freezing cold then boiling hot. The pool area was good, not very busy and the music was a bit hit and miss. served food by the pool and they had a bar with cheap drinks.

The location was great, we were a 5 minute walk from the west end/bus station and a 1 minute walk to Café Mambo. There was also a frozen yogurt place round the corner which was amazing! there's a 24 hr super market outside the hotel and plenty of places to eat nearby.

After midnight the security guard will ask all music to be turned off even if you're just playing it in your room quietly. One of the security guards was very strict and rude, one night he burst into our room uninvited which for three girls was very unsettling. He would also walk around outside your balcony pretending to be on the phone, like we were about to be chucked our the hotel or something! The other security guard was very friendly and didn't bother us once.

Tips:
-Bring an extension lead with you, there's only one plug next to the mirror and the TV is plugged into it.
-The towels are really small so if you can fit a spare one in I would.
- If you're planning on sleeping at any point during your stay I would suggest bringing ear plugs, the slamming doors, screaming and music is constant. I would say its only quiet between 7am-10am.

I stayed here last year and decided to stay again as it had everything we needed and the price is great. The location of the hotel is excellent. 3 minute walk to the sun set bars and 3 minute walk to the west end. Surrounded by restaurants too. The pool area is large and there is always a free sun lounger. Plenty of areas with sun and shade. Everywhere in the hotel is clean inside and out. The staff are friendly enough, some don't speak much English but it's not really needed just to check in and out. Rooms are very spacious with daily maid service.

The downsides this time were that we arrived at 1pm but can't check in until 2pm so we got changed and went to the pool but stayed there until about 5pm then went back to get the key. By this time there were no rooms with balconies left so our room has a tiny window which wasn't great for light and airing the towels off after sunbathing. The beds were a bit of an issue. We only stayed 4 nights and couldn't have slept on them longer. By the second night our backs were in so much pain as the mattresses are solid, and our heads and ears were sore from the pillow. They could do with being a little more comfortable.

I would definitely stay here again if it was another short stay due to the location and pool area. If I was staying for longer I think I would go for a bit of comfort.