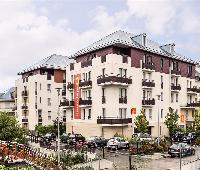 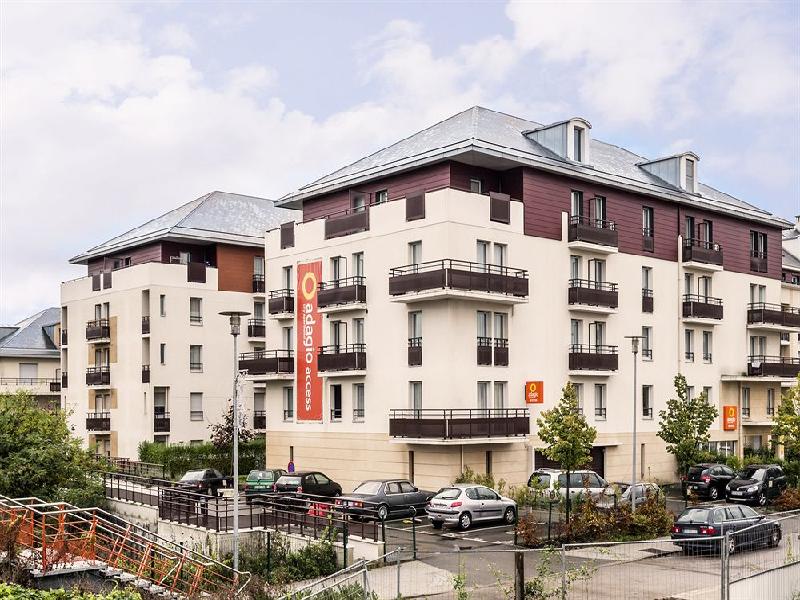 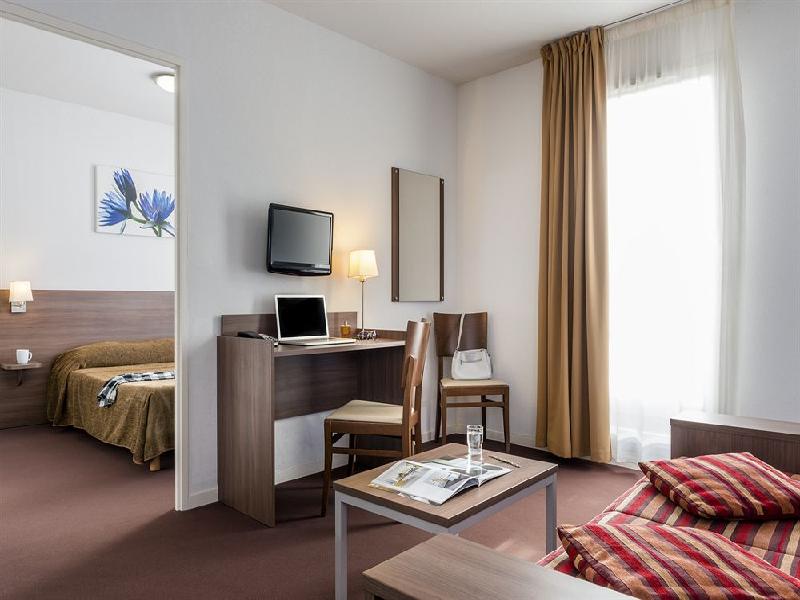 Property Location Located in Carrieres-sous-Poissy, Adagio Access Carrieres sous Poissy is within the vicinity of Saint-Germain-en-Laye National Museum of Archaeology and Chateau de St-Germain-en-Laye. This residence is within the region of Golf de Maisons Laffitte and Neuville Lakes Water Sports Area. Rooms Make yourself at home in one of the 120 air-conditioned rooms featuring kitchens. Complimentary high-speed (wired) Internet access keeps you connected, and satellite programming is available for your entertainment. Conveniences include direct-dial phones, as well as desks and microwaves. Dining Breakfast is available for a fee. Business, Other Amenities Featured amenities include multilingual staff and laundry facilities. Free parking is available onsite.

Property Location Located in Carrieres-sous-Poissy, Adagio Access Carrieres sous Poissy is within the vicinity of Saint-Germain-en-Laye National Museum of Archaeology and Chateau de St-Germain-en-Laye. This residence is within the region of Golf de Maisons Laffitte and Neuville Lakes Water Sports Area. Rooms Make yourself at home in one of the 120 air-conditioned rooms featuring kitchens. Complimentary high-speed (wired) Internet access keeps you connected, and satellite programming is available for your entertainment. Conveniences include direct-dial phones, as well as desks and microwaves. Dining Breakfast is available for a fee. Business, Other Amenities Featured amenities include multilingual staff and laundry facilities. Free parking is available onsite. 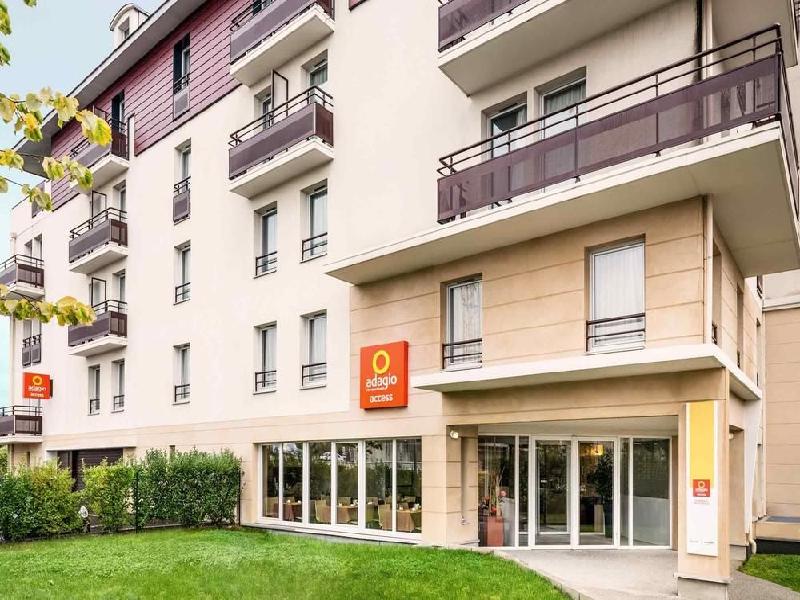 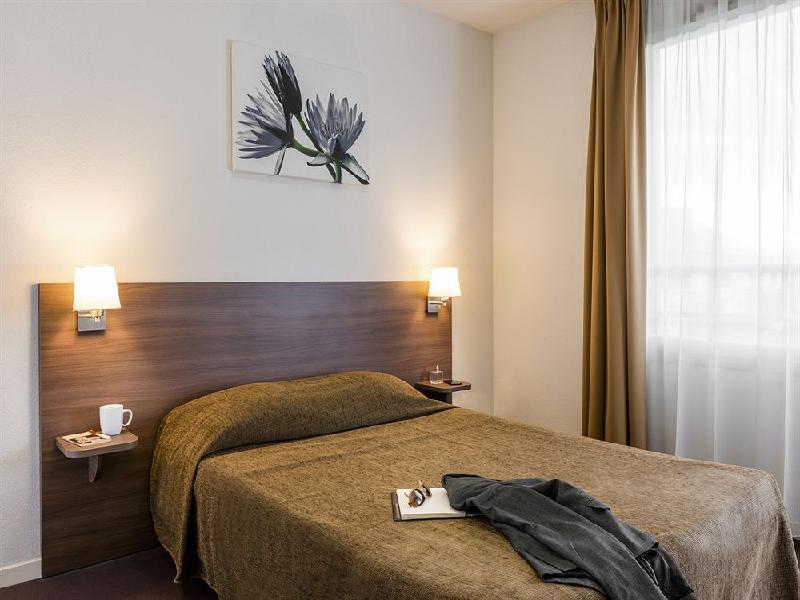 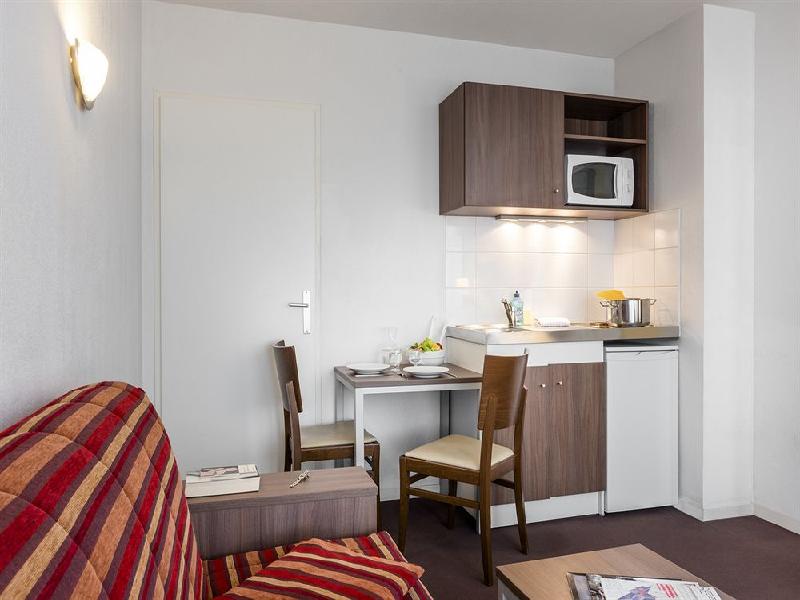 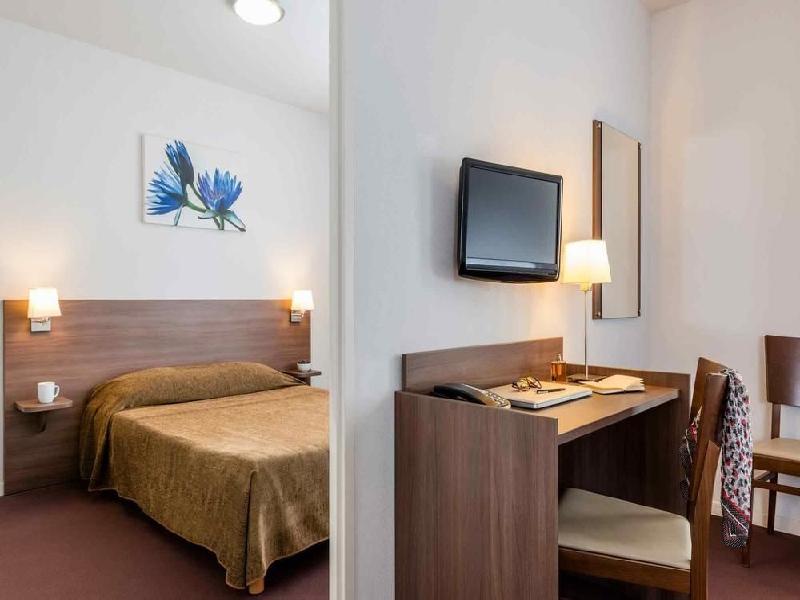 A cheap no frills apartment hotel lacking charm carisma restaurants bar and staff . Rooms not cleaned daily a basic b & b
Very noisy as bus depot and dual carriageway in close proximity
Would only recommend staying for a couple of nights if you must .

Keep away from this place! It's horrible!!

I was robbed at this place!! I got out to take a look around the hotel for few minutes, and when I came back to my room, someone has entered in my room and took my backpack with my laptop and my personal belongings! The door was surely closed, and when I back, the door was closed, no marks of broken door, nothing. The hotel and them insurance company said they can't do anything! So, I have lost all my things!! There's no safety there. There are no surveillance cameras at the halls, Just at the reception and anybody saw anything, nothing! This place is horrible! Don't stay there!

One of the worst "hotels" I have stayed in

Maybe should have been warned by the other poor reviews. The reason I stayed here was because of a promotion from Accor making it very cheap - I now wish I hadn't of bothered.

Ok, so the hotel, as others have said, is a block of apartments that they rent out. I did know this before I left, so no surprises there. I was shocked however to find out the very strange opening hours of the Reception, making it quite difficult to get hold of a person to speak to. Oddly at the weekends they work shorter hours than during the week, and close up shop at 6pm. We did arrive before they closed and were promptly checked in, however no parking was to be seen. The website stated there was parking on site, however an email a day before stated that due to building works, there was only limited spaces. This was no good to me as I was already on my way down and didn't get the email as I had no access to the internet.

The receptionist was rather cold on the point of a lack of parking spaces, simply stating they were full and we "should of booked it earlier". I didn't know I had to, or I would have done! They do have an underground parking garage, but as I wasn't allowed access I can't comment on how big it is. The first night we happened to get lucky and get a parking spot outside the hotel in the road. The other nights we had to park a long way away from the hotel as most of the on street parking has to be paid for between 9am and 7pm, even though no parking meters could be seen. The streets are narrow and due to the amount of building work going on, it is difficult to find somewhere sensible to stop.

So now we have managed to get checked in and parked up, we got to our room (after working our way though the maze that is the corridors). The room was very dated and looked like it could do with a bit of TLC to bring it back to life. There was bits of grout missing from the tiles in the bathroom, the pictures weren't hung straight, there were marks next to the toilet and bits of tissue stuck to the wall. The shower / bath only worked together, i.e. you had to have the tap running in order to have a shower (reasonably acceptable) or the shower running to have a bath (!) which was an inconvenience. Don't get me wrong, I am well aware of how the continental shower/bath tap selectors work, ours was just broken.

The bed was very low down to the floor. Not really a problem for me, but just worth pointing out. Probably would be difficult if you have difficulty moving about easily. The view was nothing to speak of out of the window, just more of the building to look at. It might also be worth mentioning that although WiFi is advertised, you can only get the internet via cable in your room (no good for my phone!) or use the WiFi in the reception lobby.

Now we come to the worst thing about the hotel. The main benefit (we thought) of having an Apartment Hotel was the ability to cook your own food. You only get 2 electric hobs and a microwave (plus fridge) so don't get too excited. There is a small selection of pots, pans, plates and cutlery which, to be fair, were all clean (maybe that is because it is up to the guests to clean kitchenware?!). We got back after a long day out on Monday, having bought some food to cook. We got to our room and tried to cook some food, only to find that the hob was not working. As reception still happened to be open, I gave them a call. I was told to check the fuse box, but as this wasn't the problem I was told someone would call me back in a minute. We waited and waited for someone to call but after an hour and a half of waiting decided to go and find out what was going on. Turned out reception had gone home without giving us a call back. Now it was half past 9, and we had to drive around for ages to find somewhere that was open and serving food as we were left high and dry.

The next day (after leaving it with them to sort out throughout the day) we returned to find it still not working. We contacted reception but in the end gave up trying and just ate out each day. Terrible customer service, they were of no help whatsoever.

Included in the price was "housekeeping" each day. One day, they moved the "please clean my room" sign inside the room but didn't actually do anything else, the other they didn't even bother to move the sign on the door, just left it alone. Don't get me wrong, I was not particularly bothered, but if it is advertised as included in the price (with just the kitchen to clean by us), shouldn't it be done? On the note of housekeeping, they had a habit of parking their big cleaning trollies in the middle of the corridors and hoover in the way, and no attempt to help you get past. Thankfully I didn't have any big suitcases or would of struggled!

I am very disappointed as I am a loyal Accor member. I stay in a lot of Accor hotels and have never been so shocked as I was this stay. The saving grace was the location. Only a 5 minute walk across the bridge into Poissy and then a 35 min RER train into Paris. Easy to get to by car (apart from finding somewhere to park!) as you miss the main Paris traffic, but easy to drive to places like Versailles.

I understand that the Adagio Access hotels are supposed to be budget, but surely there is a minimum level of service expected (particularly with the backing of such a big chain). Due to this experience I will seriously reconsider staying at another Adagio hotel, and my confidence in the Accor chain has certainly been damaged. Hopefully it is a once off.

We booked here at the last minute. First off, it is not a hotel but rather an apartment building that rents out rooms ("aparthotel"). For $132 US, we received a room the size of a shoebox, no available parking (we had to hunt down a spot on the street), no WIFI, paper-thin walls, a strange smell, no air conditioning and one thread-bare towel. We wanted to ask for another towel, but there is nobody at the front desk after 8pm.

Very poor standard hotel in very poor surroundings in the middle of a building site. The worst by far of all the hotels we stayed in while touring France, Spain and Andorra. An absolute shocker. I would suggest staying in Poissy itself, which is has quite a reasonable centre, with many bars and restaurants.