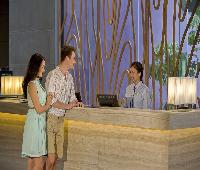 I really don't understand why there are so many bad reviews about this place. I booked the big Superior room and it was nice. I mean it's not the Ritz Carlton but clean and super friendly staff. Just as expected. After reading the reviews about the sauna I was actually scared going in there, but again it is a clean place, not run down, perfect for a rainy afternoon. Again you are not in New York or Berlin, but you also don't pay $50 to get in. It's actually included in your room charge to go to the sauna, as is a wonderful breakfast. The staff is most welcoming and friendly. The food I had was also very good.

We arrived at the property at approx. 8am in the morning. We had booked the Superior Annex Wing with Private Balcony. On arrival we were taken to a very 'grubby' entrance. We were then led up 3 flights of stairs with very heavy cases as we were here for 3 weeks. We walked into the room..... The bedding was filthy, the patio door came off in my hands and the shower had mould growing up it. Also the balcony was not safe and the view was not what they show on the website!!!!!! They are not now gleaming yellow but are all dirty and black with one over the view which I can only describe as had a fire...... It really is that bad. We immediately said that we were not prepared to spend 1 night in that room so went to reception. In fairness the owner sorted us another room which was a master suite but we had to pay a further 100 GBP for the holiday to move rooms..... Persoinally I felt that this was unacceptable but paid anyway just to make sure that the holiday got off to a better start. If anyone is thinking of booking this guesthouse then stay in the main hotel and pay the extra...... Do not stay in the annex at all..... Personally I would say that you should find another hotel or guesthouse all together as it really is awful.... On the day that we checked out (6am) The staff tried to charge us for a mini bar from the room.... (it hadn't been restocked for 3 days) We had cleared our bill the day before and they tried to recharge even though not restocked)..... I rated this on trip advisor as 1 but if there was a minus score I would have given it........ DO NOT STAY IN THIS GUESTHOUSE PLEASE....... IT IS WORSE THAN TERRIBLE.

We stayed here four nights back in September. I booked a jacuzzi room which was about the same price as a basic room at the larger 4 star hotels nearby. It was definitely the right choice .. we got a large room on the top floor and we enjoyed our jacuzzi. We also liked the great location that was so close to nightlife and not far from Patong beach. The included Breakfast was great and we did have dinner there one night as well. The staff were very friendly both for check-in and meal service as well. The rooms are not perfect, in ours for instance the curtains were in rough shape .. but don't let that deter you unless you need things absolutely perfect. They were doing a number of small improvement projects around the hotel while we were there actually. We didn't visit the sauna. We did use their airport transfer both ways. Their driver was great and on-time both ways. I would definitely stay here again if I make it back to Phuket some day.

Place is very clean, staff eager to please. Room was great, all but bed which was hard as a brick. Now some may like it that way I found it unsleepabul. They did change the mattress but was still like sleeping on box spring. The ads online are misleading says it's a jurcuzzie in the room when it's only a whirlpool bathtub. Roof top deck is great nice for sun bathing and star gazing. Spa wasn't open long enough for me, 3pm to 9 or 10 pm. If you went out anywhere for a tour by the time you get back it's closed
Hotel is right in the middle of everything, and short walk to beach. Owner Mr. Paul, very nice person. Hope this place stays open for a long time, do plan on going back.