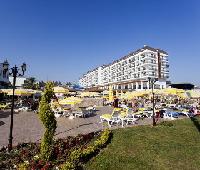 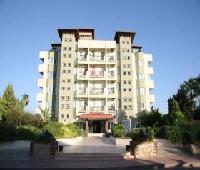 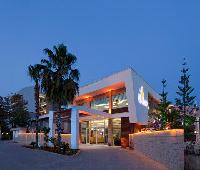 I honestly think that the hotel needs to change up some things. What I mean by that is that they should be more versatile with basically everything. The foods are mostly great but they are all the same. The room service is occasional. Their pool and services are mostly okay though. My biggest problems are : 1. The WiFi is absolutely terrible and 2. The shower is also pretty bad ; there is no bathtub and no bath cabin. Besides these things it's pretty enjoyable and it is also close to the beach which is great because no one likes to walk in 35° Celsius. I can recommend this hotel for those who are looking for a decent hotel and a relatively ok price.

I cannot say much things about this hotel, but for me is the worst hotel that I have visited in Turkey.
Generally this hotels looks like a old hotel. Rooms doesn't have comfort and the beds are really bad.
Another thing is food and the food was same every day and not so good served.
Interent was big desire for me and I had just around pool and lobby.

In general is this hotel, very small and quiet hotel.

After chatting to a trip advisor from lowcostholidays I booked a weeks all inclusive holiday for me and my wife at this hotel and regret it after landing at Antalya airport we found our transfer and was told it would take two hours to get to resort but they didn't say they stopped for coffee on way when we did get to hotel the reception staff could hardley speak English so just photo copied our passports and gave us a room key we asked if we could get a drink or anything to eat and where told to try the local bazar if still open at 12.30 at night well the next morning we came down to breakfast to find nothing labelled on food dispensers and nobody again spoke English and then we found out of all the guests in the hotel we were the only British couple there I could go on about other things such as the all inclusive bar which only stocked beer or gin and vodka manly for the Russian guests if you wanted anything else you couldnt even buy it there are many more things I could say about this holiday and hotel but needless to say we would not be going back there or booking through lowcostholidays again

Better than other reviews

We went on a family holiday in September 2014. My hubby son and his girlfriend liked it but my sis in law and hubby did not, her room was dirty and her bedding damp. We on the other hand had no problem. One mans meat is another mans poison has the saying goes. Plenty of food and the staff worked very hard but some did help the "dolly birds" more than the other guests. Drinks glasses were small but if you bought a pint glass they would gladly fill it for you. Had own private beach with a bar. Weather was very warm and the sea warm too. Pool would have been better if there was steps to get in and out and not just ladders which were a little rickety. I would say it was good but not very good.

People work hard, hotel is clean, food is tasty, loads to choose. Drinks in bar as usual for all inclusive. animation very entertaining. Thanks for very enjoyable holidays. Nice to see dolphins swimming in the dolphin park from the top floor balcony.