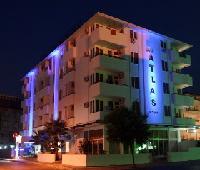 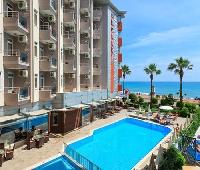 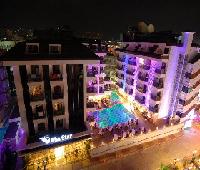 Definitely not for british people

Jjust came back from holiday, saw the reviews after booking the hotel and we had no choice, We will not advise anyone to book this hotel, the cleaning goes on the all day and there is rubbish everywhere, used plates, cup, glasses. The toilets where so dirty that we had to go out and buy bleach before using the toilet. The food was terrible, mainly salads that smelt like they were going off most of the time. The pool area was dirty, even the reception area which is meant to be the most important place in a hotel was always dirty. No English speaking people, but the staff where so friendly even if they did not speak any English. The bonus is it is near the beach and lots of shopping areas, including a big shopping centre which is about 10 mins walk and not far from the city centre,

If you want to waist your money and your time book this hotel. The most uncomfortable beds, disgusting food and drinks even tea tasted awful. Hardly could find anyone that speaks English. No supervision around the pool for children. Staff and gusts were walking around the pool with outside shoes and almost everyone was smoking without any concerns about small children around them.
It was my worse holiday ever. By the way the beach is not sandy at all and was dirty as well. I couldn't believe that they only picked used plastic cups from the beach, washed them only with water and used them again.

Most staff are nice and friendly if you could communicate with them.

Don't ever book your holiday with Teletext holiday because they are liers and very pushy.

This review is honest and fair

This is not a 4 star hotel even by Turkeys standards. The reason I have given it a 2 is one for the cleaning - which happened daily. 1/2 for the food although extremely repetitive and the food being remixed for lunch and dinner it was fresh and we had no illness and 1/2 for the staff who were friendly and and helpful as they could be considering none of them spoke good English. On arrival we were given a very small double room, which on complaining they gave us a family room which was more than adequate, although the beds were very hard and we had no hot water on 3 of the mornings . There was air conditioning which didn't seem to work to well and the Tv had 1 English channel bbc world news . Although wifi was free in the reception and pool areas it was slow and everyday we had difficulty gaining access. This hotel is definitely NOT for British nationals but Russian Germans and Dutch. The pool is a reasonable size but only had one and once more people arrived you couldn't get a lounger. There was no entertainment and the only alcoholic drinks available were wine beer or vodka. It took them 4 days to restock sprite. No pool snacks as mentioned. Although all inclusive u had to pay for the beds food and drinks at the hotels designated beach area. We had to ask daily for butter clean cutlery and plates/dishes. Although the eating times were over 2 hours if you arrived after the start time the food was gone. We would definitely return to Alanya and also recommend Minister Tours who were reasonable with their prices and made our trips interesting and enjoyable. But we would NOT return to this hotel and recommend you don't either!

Everything was fine, but entertainment is very poor..The staff is very friendly..and the hotel is clean, not bad in general..Night life around the hotel is poor, the beach is very close, which is a big advantage.

The place was nice and clean walking distance from the sea , and the staff are nice , only the food , same food everyday if you love salads there is always different types of it , the AC makes a loud voice and I had to turn it off. Make sure to have a room facing the pool it's the best view , the internet is very slow and you can use it only in the lobby