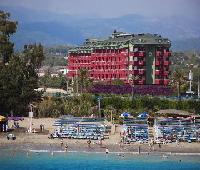 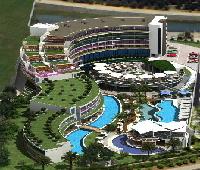 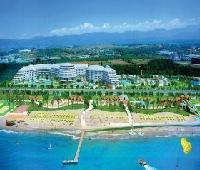 That so called 5 stars Hotel, was very terrible and unsatisfying at all. We like Turkey for Mediterranean climate and nice food, also intriguing history. But that Hotel was
" Waterloo".
We can describe very shortly.
- Very noisy Hotel. Music so loud in every ambient of Hotel, even in Lifts. It was not possible to relax at all.
- Air Conditioning of Hall, and other common ambient almost miss, even it was the hot July, the peak of Summer time.
-Staff, almost all of them was unhelpful, any service by them. Need to make a big STRUGGLE to make them somehow helpful. Very angry face. It was understandable
that this staff was mistreated by Management.
-The English language, that need to be the first language used in Hotels 5 stars, was unknown. Only some words. Reception was impolite, and no English. The Client's Relation post was e very ugly and angry Women, without English at all. Also very impolite.
-The food was Quantitative, but no qualitative. Any Taste of Food. Seafood does not exist,fruits no fresh one,the food generally was been recycled . Glasses were few and the service staff in Restaurant was so unfriendly and no dynamic. We waited for glasses, because they were for washing yet.
- Long Lines for food. It was the impression that this Hotel was a Prison, where the prisoners try and battle to get food. The waste of time was also for gathering all food in table, because has not the tray for it. So the plates, glasses, bread, food, gathered one by one, causing as a consequence a very big mess and noise in Restaurant. Like a Battle. So funny and terrible situation at the same time. No personality at all.
- So called Restaurant a-la carte, was only the plate with one fish. No other combination with fish. Very poor one.
- Music was terrible, no European one.
-Hotel was in line and of mood to Russian people, which one was the majority in Hotel. Plus Caucasian. No European at all.
-Small rooms. For cleaning the room, need to pay extra money.
-The towel of beach were so uncomfortable for changing, because the times always changes. The service of them very unfriendly.
-5 Euro only for a drop of iodine, when my Husband was hunted in stones of beach.
- Alania was rather long distance, and Antalia with two hours of bus. So the life was only beach-hotel and vice versa.
-The people at Hall nr 2, use the poltroons like beds. Put the legs in poltroons or divans.
- In front of this so called 5 stars Hotel was the Haydar Pasha palace, also a Hotel with 5 stars. It was a brilliant one. And when compares the 5 stars of two Hotels, think "How Strange is this World" .

Very bad food and drinks only local and extrmely bad,the people at reception some jerks.I gove the family 10 euro,we were 4 families,and i waited inthe loby for 3 hours,seven adults and one child under 12 years.Small rooms,the air conditioning broke down,a family bed water flowed from the air conditioning.Breakfast was,attentionplease;an entire lne full only with bakery products.A tray with hard boiled eggs,one distasteful omelet,one with small peppers baked,and another one with potatoes with rosemary.4-5 assortments baines,herbs and salada few.And very few swets.At the bar drinking water was warm,and the bartender alwys waiting for mooney,to make a cocktail.Beleve me it's humiliating what happens there.I called the travel agency to move us in Belek,where was very good.Belek beach wonderful.PLEASE run by Aydinbay gold dreams,it'sa NIGHTMARE.

Great hotel.
Good food all day. Bar open from 10-midnight
Clean rooms. Fresh beach towels everyday
Beach has a lot of pebbles on it.
All inclusive bar on the beach and poolside.
Very friendly staff always ready to help in anyway possible.
Highly recommended for families

Hotel is nice and clean. Food and drinks are great. The beach is very close and it has a big pool. The bazaar is few minutes of walking. The rooms are clean and very nice. The town of Alanya is about 20 min with "dolmuš" small bus.

Good time in a good place

This hotel is not big , but clean and comfortable hotel. Clean sea and pools, delicious food. I can recommend this hotel to couples and families with children. Not far from hotel are 2 or 3 big stores " bazaar" . Rooms on villas are better then in main