The apartment in Rome has 1 rooms and has capacity for 4 people. The accommodation is equipped with the following things: terrace; iron; central heating; TV; stereo; refrigerator; oven; washing machine; dishes/cutlery; toaster are provided. 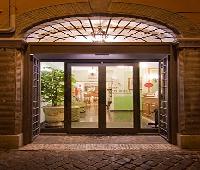 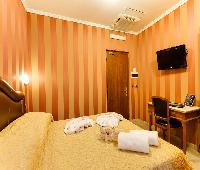 The apartment in Rome has 1 rooms and has capacity for 4 people. The accommodation is equipped with the following things: terrace; iron; central heating; TV; stereo; refrigerator; oven; washing machine; dishes/cutlery; toaster are provided.

This is basic hotel that is clean and well serviced with a basic breakfast. The rooms are fine and the service is good. This is hotel is for those that spend little time in their rooms and are touring, in terms of those needs it was perfect for me.

We arrived at Seoul really late, around 11pm so we booked a hotel in a region we have stayed before. Didn't really expect much because the price was quite low. When we arrived, there was only one receptionist there and gave us one key. It didn't seem to have more rooms vacant for us anyway. When we arrived, the size was quite small but it was okay for Seoul size.

The bathroom lacked a shower curtain, so we needed to sit within the tub to shower instead.

Hotel is quite old and bathroom is tiny. Sound proof is quite poor. Have simple breakfast. A lady staff can speak good english. Close with subway station hoehyeon. Location in myeongdong and namdaemen.

Love this hotel because its near to namdaemun and myeongdong. Easy access to subway. The front desk staff are all friendly except for one uncle who incharge during night shift. The staff mumbling in his language in a sinical way when i ask for a help. Other than that the stay is very pleasant

I was stay at the hotel for 3 nights. This hotel is near by MRT station exit number 4, Namsan Tower, namdaemun market, and Myeongdong, which all you can walk from the hotel.

The staff was really nice and mindful. Also some of them could not speck english that much but totally was fine.