12 Rue du Bac; 12,Paris,FR,France 3 Star Hotel
Check in 14:30
Check Out
Hardly got any sleep and hit with extras !!! BlueCoatAcademy on 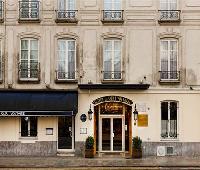 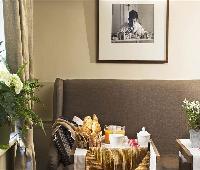 Hardly got any sleep and hit with extras !!!

I arrived here last night and was greeted by a friendly receptionist. I had paid up front for my room and had arranged by phone to leave my car there on Thursday when I was flying and taxi it into the airport. I could then get a taxi back for my very short stay which was planned to be from about 10pm to 5am on Sunday. I would NOT be having breakfast.

Before showing me my room I was asked for a sum of £9. I asked what this was for as I had paid for my room in advance. I was told that it was for parking as I had dropped my car off on Thursday. She said that I should have been told about this but I assured her that I had not. If I had been told that there was a charge for parking I would have left my car out on the street outside as this is a quiet residential street with plenty of parking available.

As I was putting my cases into my car, as I did not want to do this so early in the morning, a gentleman who I assumed to be the owner asked me what time I would be leaving. I told him around 5am to which he replied I am not up so early and am just a little concerned about being disturbed. I assured him that I would be as quiet as possible. It is a pity no one took me into consideration about being disturbed !!

I was shown my room ( Room 4 ) and immediately went to bed to try and get as much sleep as possible before my early long drive. IF ONLY !!! There was a lot of loud discussions talking taking place in the corridors and right outside my room which went on for ages. Then the person in the room above me started to move about which was making so much noise with the squeaky floorboards I thought at one stage they were going to come through. This went on for about an hour until I eventually dropped off through sheer exhaustion more than anything else.

Then at 3.45am I was woken up by the person above again moving around obviously getting up as I could also here the toilet and shower I think. The noise of the creaking floorboards was unbelievable and as much as I tried I could not get back to sleep. Eventually at 4.15am I gave up and decided to leave.

The reason for booking this was to allow me some sleep before my long drive north, unfortunately the sleep I got was very short and very disturbed. I also do not like being conned with unexpected or explained extras.

We had a good stay here. We were welcomed. The place is clean well decorated, and very adequate for a overnight stay. Proprietors helpfully and friendly. Would use again. The recommended restaurant for the evening see review royal tandoori

Myself and my husband stayed at Stansted lodge for one night at the end of July as we were flying very early to Rome the next morning. Absolutely loved it! We were greeted by a lovely lady, Mariola who didn't mind us arriving early and shown to the kitchen. After arranging a taxi at 4am the next morning for our plane we sat down to a lovely cuppa and home made lemon cake. There is tea, coffee, bread for toast and jams that you can help yourself to at anytime. The backyard was lovely, dotted with two apple trees. Our room was quite dated but i liked it, very pretty even though we had two single beds.
Shower was good and hot. Mariola gave us a map and we went for a walk to explore. Only downside was that the pub down the road didn't serve dinner so we walked back and had toast for dinner. Getting up at 3.30 am the next morning we helped ourself to another cuppa and left. Hope we didn't make too much noise. Thanks for a lovely night.

Average B&B with a lovely owner!

I stayed at this B&B last year before my holiday to Sweden. It was booked last minute and it turned out to be decent but as it was last minute it was much more expensive due to the circumstance but that is no fault of theirs. The location was pretty difficult to find even by sat nav but it only took us a few extra minuets than it should have. On arrival we were greeted by a lovely foreign lady who gave us a basic tour and the self serve breakfast. The bed I stayed in seem to be a little broken and quite uncomfortable and the rooms where quite old fashioned with an old TV with free-view. Breakfast was just as you would expect for a self serve breakfast, toast, cereal etc. It was a standard B&B experience but nothing special.

Greeted at the door by a member of staff which was very nice after a long day of travelling. The place was clean and tidy as well as offering a 24 hour self service kitchen. The stay was just for one night before an early flight from the airport. It felt nice and homely which was nice after travelling so long. A nice touch of the lodge was the homemade cake in the kitchen, this added a personal aspect to the stay, which was very appreciated after a long day of travelling. I would stay here again if I had an early flight from Stansted.