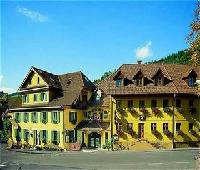 We stayed here as part of a coach tour (Kavanagh's Travel Ireland) for 3 nights from 6th July 2017. The hotel was pleasant enough for a short stay particularly as we were touring the Black Forrest and nearby cities during the day. Our room was very big, it was dark and very warm. There was no air conditioning and we couldn't leave the window open due to traffic and street noise. There was a barbeque on our first night which was fun but one of our party didn't get their meal. It appeared the staff did not have an efficient system leaving some being overworked and confused. Added to this was the language barrier. Some of the female staff appeared very rude. Overall it was okay but we wouldn't choose it for a holiday. The village was small but very beautiful and the surrounding areas were stunning

well worth a few days stay,i was there as driver for a walking holiday tour & 3 other coaches were there at the same tme ,but this didnt spoil any thing we all had seperate dining rooms & there are 3 buildings next to each other for bedrooms,good bar ,freindly staff & locals,the food was great & plenty of it with choices,my room as driver was a bit below the standard of the others but we always get smaller,or poorer rooms ,saying that it was ok

No tap water supplied for the dining table. I got a filthy look when I asked for it. Shocking.

No English TV at all, just BBC news 24. Many English speaking people stay in this Hotel so surely just ONE English speaking channel would be available. Shearings say in their advertisement for this holiday.......... "Satellite TV".......... which is very misleading.
The refusal to supply a glass of tap water with dinner was really shocking.
However, the area is gorgeous, the holiday with shearings was fabulous as usual and we enjoyed the rest of the holiday, besides these complaints, very much.
Love Shearings, the drivers were great.......... but not this Hotel.

Great location and the rooms were a good size and very clean. However the food did not give you a sense someone had made an effort in any way in what was served up. Not a good advert for the culinary reputation of a area that offers so much. Overworked staff were exceptional in their efforts and should be applauded for their hard work. This hotel is used regularly by a major UK tour company who should seriously review the food being served to their guests. We were not the only people with this view. A good trip ruined by very poor and unimaginative evening meals.

Stayed here whist on a Christmas Market tour with Shearings. The hotel was very comfortable and the staff were friendly and pleasant. The rooms were cosy and the beds comfortable. Our room was overlooking the local church and the bells rang loudly during the day but not all night.
As usual when abroad the food was aimed at German customers which caused a few of our fellow travellers to have a whinge.( My answer to that is always "if you want British food then stay at home"). We always like to sample the local cuisine and felt that the food here was OK. It was St Nicholas day whilst we were there and on that morning every guest received a chocolate Father Christmas and in the evening a small Bear (Baeren means bear in German). We found the restaurant staff were friendly but service was a bit slow at times probably due to the large amount of guests. the lady in the bar was very friendly and service was speedy.
There was entertainment most evening, the best being an Oompah band who were very enthusiastic and funny. All the songs were in German but the leader of the band apologised for his poor English and did hid best to tell us Brits what each song was about.
The hotel is situate in a small village which is picturesque and the locals friendly and was decorated for Christmas which added to its charm. The local bakery also served some very tasty calkes.
Last but by no means least is a big thank you to our drivers, Ian and Julie, who did their best to ensure a good time was had by all.