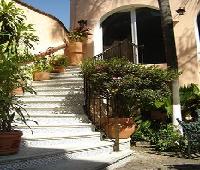 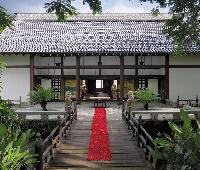 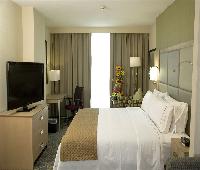 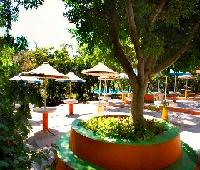 The notable plus of this hotel is its gardens and pool. Most rooms are quiet, but even though they are close to the main square (2 blocks) they are outside the 'hotel zone', so we felt a bit cut off.

On our first night we were offered a room overlooking the busy street or one at the back of the property next to the 'barranca'. We accepted the latter, but the area was poorly lit and the room was much too large and with minimal furniture. Luckily on the 2nd night we were able to move to a better room near their pool.

The Front Desk staff need to become much more familiar with what they are selling. I asked 3 different people about the property's connection with Malcolm Lowry, none of them knew anything and they weren't even aware that there is a plaque in his honour on the front wall.

I also asked about the price of the breakfast. It was 'reasonable' said the young man. Only later did I find out breakfast is included with the room. Why didn't he tell me that?

The management should be reading the less than positive feedback on TA and look to improve. My guess is that they don't even bother to visit these pages.

I didn’t any research about hotels before coming to Cuernavaca, so I decided to walk around trying to find something nice, this was exactly what I was looking for, they give a room close to the river which you can hear all the time, the room was too big for me haha and the breakfast was included so it was great, the only detail is that there wasn’t hot shower, that’s why I took two cold showers, for sure one day I will return. (Pool inside)

We were quite disappointed by our stay at Bajo el Volcan last weekend. We had booked and paid in advance for two rooms - a single and a double room. The single room had no window, other than a small unscreened vent-type window in the bathroom. The room was claustrophobic and hot. The double room was bigger with windows, which was good, but we didn’t like the big cockroach that greeted us in the bathroom. Nor did we like the two spiders in the bedroom. Adding to that was the fact that the advertised free wifi didn’t work in our room. We called the reception desk to ask for help and were told that they were busy and they’d get to us later. Well, later was about 30 minutes later. We won’t be returning to this hotel.

This older property has large rooms, a great outdoor pool. room service, and free parking, free internet. My room had a terrace for breakfast. It is very close to the market and artesans in charming Cuernavaca.
I would stay there again.

Pretty with Pool and Parking, but Has Deficiencies

This hotel had a promotion for about half their posted price, so I made a reservation for it at about $57 (US). It is conveniently located for visiting the central area of Cuernavaca. It has parking, a pool, and rooms that are placed far enough back from the streets that only light traffic noise applies. The staff was nice and friendly.

The problems we had related to the room itself. The mattress was worn to the point that we could feel the coils through the padding. The bedroom had NO electrical outlets except for the ones used by the TV. The lamp was wired directly into the wall, and the desk had no outlet. We had to recharge our phone and computer in the bathroom. Because of a non-working fountain outside, mosquitoes would enter our room if we left the door open to get fresh air. But if we closed the door, the room smelled musty. One nice thing is that there were reading lamps above the beds; the bedroom lighting was dark without those burning.

The wi-fi was strong, but it is a long process to log-in each time--choosing a company name, typing a long e-mail address, and then entering a password. Strangely, after I made two wi-fi calls on my phone, the system would never let me log in via the phone again; my guess is that they blocked my phone IP address because of the activity related to the phone calls. (I've never had a problem elsewhere logging into wi-fi with my phone again if it worked the first time.)