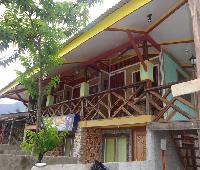 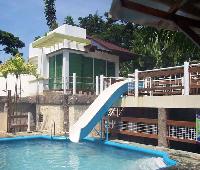 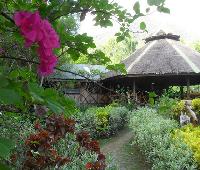 The house is located just in front of the main parking lot but as we were there in off season it wasn't noisy. We had clean doubleroom with fan and towels for reasonable price. There is not hot water (you don't need it anyway) and the electricity is only from 18:00 - 6:00 (6p.m.-6a.m.) but they told us when we arrived so we were fine with that. The house is 50m from the port to underground river and 5minutes walk(300m) to the beach. The only con is that they have a sign there that says "american and filipino breakfast" but when we asked about it they just told us "no breakfast".. Otherwise quite pleasant 2 days.

Could be much better

The place itself was not so bad. The AC worked (when electricity is on), it was rather clean, and the little balcony was nice to hang out. We stayed 9 days is Sabang, so we could bargain a good deal. The family living in the hotel was very nice to us and helped when one of us got sick, hurt or even for cooking. Thx for that. The young man in charge however is as lazy as it gets. Example: We negotiated to have (for a fee) hot water delivered every morning, for coffee, noodles, tea... He never bothered! If I remember well, only one morning he actually delivered the water by himself. We had to go look for him (usually sleeping on the check in counter) every morning. Even better, he actually forgot to charge for it... But the worst part came when, although we were the only guest for most of our stay, he managed to mess up his bookings and asked us to stay in another hotel for the last night. According to him he had some "prioritary bookings" and we should move to a room of the same standards next door. Our mistake was to actually trust him on the new room. The new room was a huge downgrade! Small, smelly, filled with mosquitos and no balcony! When we told him, he said "sorry, sorry" "same room" and went away with a weird smile. We were very happy after 3 days there (and even brought him more people), but he managed to ruin that out of laziness. Would NOT go back.

Tray to foo me

I was stay there for 3 days. The room was too expensive for what you got. The room was clean but smell mold. If you are staying there be sure that you will get a receipt because when I was checking out they want me to pay again for the room, after I was really angry he gave up and give me a receipt in the end. So you cannot trust them.

Nothing special but great service

Had a great time here. If you're into high end and classy hotel, then this is not for you. But, if you're only after the underground river, this lodge fits you. Great service special mention to Joshua. Thank you!

We departed from El Nido and arrived in Sabang at 5am. There is no person at the front desk but our driver knew the owner so he was the one who called him. We were told there were no rooms available at that time because the guests will be checking out at 12nn.

I said it's alright since we are going to the underground river and it may take a few hours. I asked then if we can leave our baggage and the front desk said yes. He even assisted me inside the Subterranean River Office and in getting a boat.

After we came back, we had to wait a few hours. They immediately clean the rooms so we can use right after. The rooms were great, two single beds put side by side with generous 4 pillows in total. There are cabinets and a sink. There is strong supply of water, no color whatsoever. I also love the curtain near the bathroom so you dress even if you are sharing the room with a friend. I shared my room with two other people but they no longer collected me an additional person fee.

Later that night we played billiards with the staff for free. Originally Php20 per game.

The next day the front desk (if I remember correctly his name is Kuya Aaron) assisted us again in booking a mangroves tour. I think the original price per person is Php200 but he was able to get us a discount so we just had to pay Php150.

Take note however that the electricity only runs from 6pm-6am. Their flyer says fan room is Php1500 but we only paid Php800. Additional person is Php300. A number of restaurants and grocery stores nearby.