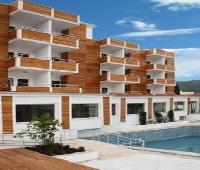 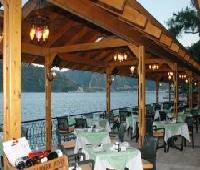 Never mind what people say this place is fantastic. Mr.T who runs the hotel can't do enough for you. One day we had a problem getting into the apartment and Mr. T sent a man straight away to change the lock. The rooms are cleaned regularly and the bed linen and towels changed. The pool and communal areas are spotless. We will definitely be returning on would recommend this hotel to anybody.

Arrived, as solo traveller in June 2015. The hotel was a building site. Had to find alternative accommodation. On return to U.K. Hoyer supplier was really quite disinterested, so much for Alpha rooms. People of Turunc are amazing, helpful and friendly, eventually got fixed up with excellent apartment.

Ok but agree with previous reviews.

More or less exactly what i would write in complete agreement with review before this one. It is NOT the hotel anymore it is the apartments which are in the centre of the town. Our apartment had 3 rooms a main room a bathroom and a bedroom. The apartment was only cleaned once in the two weeks we was there. The apartments are in two blocks and we was in the block that was next to the swimming pool. We was without hot water on many ocassions.Our balcony overlooked some other buildings which included a cockerel that wasn't sure if it was day or night and made a lot of noise. The breakfast was ok and was typically Turkish. The place is pretty clean but needs refreshing. Overall it was ok. I think you would struggle for a sunbed in peak season but i think you won't be able to book there soon anyway as it Will become a Turkish only place shortly.

1 bedroom apartment for 3 contained 2 plates 2 cups 1 spoon 1 knife. No means of cooking no kettle. Sheets changed once in 2 weeks despite asking regularly. Rubbish including bathroom bin had to be emptied by ourselves and we also had to supply our own toilet paper. Breakfast was ok standard turkish style. I feel this hotel like its namesake is heading towards turkish guests only. Serkan the young man on duty most days was pleasant and generally helpful ( except for housekeeping). We met the famous ? Mr T only ònce when he tried to sell us a boat trip. Once we refused he lost interest in further conversation. Turunc is great little resort which we really enjoyed abd will definitely visit again but to different hotel

No Longer the Barbaros apartments

The Barbaros Beach no longer exist as it was sold earlier this year. We were booked for this apart hotel but what we got was a hovel up a side street with no balcony and what can only be described as a transit apartment there was no cooker yet there was a modern enough cooker hood which pulled out. The pots were filthy and the place over looked the beer crates to the side of the room and the back over looked corrugated iron roofing and a yard that was used for drying the washing. We arrived at midnight and shown to this airless room. the beds were at least clean and comfortable, but the fan had no safety cage on the front. when we confronted the manager the next morning he more or less told us that if we did not like it we could leave, which we did. We would not recommend anyone to stay there, as the staff and management are rude and surly and very unhelpful