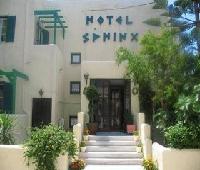 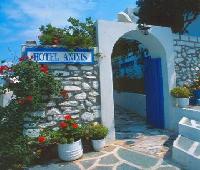 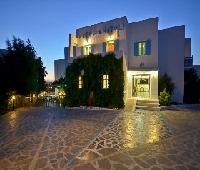 Worst hotel I ever visited

We had booked 3 rooms in high season for 5 days but we only stayed for 2.
The rooms were dirty (we found cockroaches in the toilet) and the rooms were not soundproof.

The worst of all was the service.The lady running it was really impolite. he second day, when we asked for a new towel (since they clean once per 5 days)they refused to give us one and told us we should have kept the others clean. When we got angry she suggested to express ourselves by hitting our girlfriends (since they were with us). We left within the hour.

I visited the hotel in a low season. It was quiet and clean. The room was small however what can expect of an old hotel in the centre of a Greek island where the buildings generally are not big. However oposite the hotel there is the Best restaurant in Naxos named Nostimon Hellas, where you can have a healthy Breakfast with handmade pies and omeletes and a delicius dinner up to creative greek mediterranean cuisine!

HORRIBLE, DO NOT STAY HERE

Do yourself s favour and do not even consider staying here. I booked here for 4 nights through booking.com(whom I've used in the past and have been perfectly ok) I didn't have high expectations due to previous reviews but as a young, solo traveller it was in my budget, seemed safe and close to the action so I decided to!
I arrived by taxi and was basically grunted at by people running the place. I told them I was here to check in and showed by booking confirmation and they told me "no" as they were completely booked. (I had a confirmed booking page etc. ) I am from Australia so didn't have a working phone with Internet and they initially refused to give me their wifi password so I could look for other accommodation. This is was totally unsettling as a solo female traveller who had no idea where they were or what to do.halfway through all this drama the woman u was dealing with picked up her mop and bucket and began cleaning.. I was absolutely gobsmacking to say the least!! I understand there was a bit of a language barrier and eventually they got another person staying at the hotel to translate but absolutely horrific experience!!! DO NOT Go here!!!

I was not supposed to stay in this hotel, but I was put here because of an overbooking ! It happens to be that these 2 hotel managers are sister and brother !! Surprise !? The brother is overbooking his hotel in purpose of filling up the hotel to his sister. I have never experienced such an arrogance og unpolite attitude from these 2 hotelmanagers in my life. Outrageous ! The rooms are horrible, the bathroom is really bad, and the room is smelling really bad. It must be mentioned that I booked via Booking.com and I also prepaid. This did not help at all. But there were nothing Booking.com could do because all hotels were fully booked.

If you want to book an crap room and pay 60 euros per day then yes go ahead... We are 2 couples that we 're currently staying at the hotel... We 're Greek but the old lady didn't hesitate to place us in a basement with no Sun... The problem is that we can t leave the place because we prepaid the whole amount... The old lady very impolite and unhelpful... Stay away