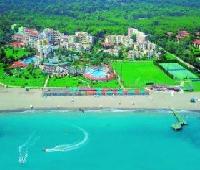 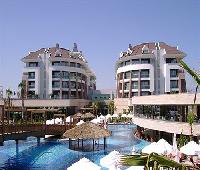 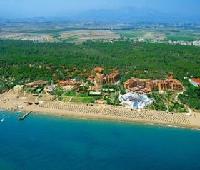 We went to turkey with high expectations as all our friends recommended Belek for the nicest place in Antalya.
To summarize:

Beach: dirty and abrupt and with waves. Children were very disappointed.

Note* in order to catch sun beads you will need to be at the pool/ beach at 6am, latest.

Hotel room(garden view in the main building): not too big but ok and clean.

Hotel staff: they only speak russian as a foreign language, at the reception they can carry very very basic conversations in English... entertainment team are the only ones that speak English

Food: not bad but definitely not the food you would expect from a 5 star hotel.
3 star maximum...

Drinks: the so called international brands are actually local drinks with the lowest quality possible.

Manage your expectations before you go to Belconti. Not a 5 star hotel.

Great for families with children

This is a very solid resort, but not a five star hotel. It is very green, the beach is awesome and clean, the pools are big and nice.
Reception: very nice and willing to help staff, most speak Russian, some speak English.
Waiters: some are really great (you don't have to leave tips to get special attitude), some are temporary staff and very slow.
Cleaning: maybe we were unlucky, but the room was pretty dirty most of the time, and the only thing we needed to be done every day is washing the floors as we stayed there with a toddler. After we complained, we had our room cleaned twice in one day, but then the quality of cleaning was decreasing gradually. The outside facilities and roads were also often fairly dirty.
WiFi: very good in the lobby and restaurant, OK in the rooms. We stayed in a club room half way from the main building to the beach, and the signal was good enough for video chatting using a laptop most of the time, but almost always not good enough for an iPhone.
Food: very solid, lots of varieties, almost always fresh, but it was very hard to feed a toddler. Meatballs were made from lamb, vegetables were either boiled, hard and tasteless, or mixed with sauce.

You can see, I don't leave long reviews but this one is exemption. First, the resort itself is not too bad and do have potential. Nice green territory, pools, beach. But the service ruined everything. The only people working hard is cooks. The food choice is not wide but the food is edible. The drinks choice is very poor and the quality of alcohol is poor. The spa is not the best but still ok. The resort is tired, the rooms are not clean, the furniture, towels and other amenities are the cheapest. The people from stores and SPA are too intrusive. The wifi signal quality is very bad and there is no wifi in the rooms. But the main problem is staff. Reception is not helpful, the reception manager - Mr Ramazan Koyun is rude and not willing to assist at all. He told that I must go to guest relations and guest relations department was not helpful too and said to go back to reception 😂 And yes, they use the words "you must" . Guest relations managers - Svetlana and Tatyana. While Svetlana was trying to do something, Tatyana can do nothing at all and don't want to. Why do they called "guest relations"? No idea. After a few times of unpleasant talks both to reception and guest relations I asked Mr Koyun to provide me with contacts of senior management. He refused in a rude manner. I sent a message to the hotel - no answer. I sent another message to their Senior Coordinator - Mr Acar Ipekci, no answer. Why did he leave his business card and greeting letter saying "pls contact me if you need any assistance"? No Idea. So they don't care about customer loyalty at all. It's definitely not a 5 star resort, believe me. These days the competition is very strong, there are so many nice places to go, so don't waste your time with Belconti Resort.

We spent a week in the this hotel in the beginning of May 2017 and had quite dissapointing experience. We ordered a room in one of the remote cottages to have a peaceful time but at check-in were given a room in main building. As we were told because it`s been just renovated.
Well yes, it was, but also rooms of the main building face to pools and the whole public area of the hotel which produces noise in the day and in the evening. When we were relocated to the cottage, things became worse: nobody cleaned up the room for 2 days, on 3d days I had to go to receptionist and ask for new towels.
No fruits and berries were served in restaurant. We tried to order some strawberry at reception and it took 2 visits and talks with different receptionist to convince them to deliver a basket of strawberry for us from a plantation.
So as I wrote above, definitely it is not 5-star hotel, 3+/4- I would say. Obviously, staff do not interested in customers loyalty.
Poor internet. Cottages must be renovated, it`s out of condition.

Dont recommend at all!

First of all - its not a Ultra all inclusive 5* hotel, be careful!

Everything was messy, we didnt wanted to walk and sit at all. Example children`s pool - There were stones, twigs and mud everywhere. In every other hotel every day the hotel staff are cleaning all the time, especially over the children`s pool.
And how hard is to mow the lawn?? Everywhere was long grass, unmaintained. Looks like the hotel didnt give nothing that there were many visitors..
Food.. We could have bring our own food. Bread was thawed and in the middle of it it was so cold all the time, same with example fries (Ice-cold!) Choice of the food was terrible, so small and no salt, no pepper. It seemed liked someone has put the food into the oven and walked away. And then coming back all the food is overriped and has no flavoring. Sorry, but we have been in Turkey 5 stars hotels so many times (8 times) and we have had really good hotels and we have seen that hotels are clean! But this was not. Restaurant tableclothes were so dirty and old, that means if you even found something to eat then you didnt wanted to eat it, because appetite goes away.
Then drinks.. In every other hotel are alcoholic drinks available from 09-10 am in the morning. There was the time 11 am. Men wanted to have some beer sometimes, but they cant.
And more.. If we wanted to sit outside and eat, then we cant do it, because people smoking places were front of the eating restaurant!? Every single time we wanted to eat outside there were horrible stench of smoke. You cant eat so, especially when you have 3 children with you.
Animation team was zero.. although the hotel was supposed to be open all year round.

Internet not working, its a lie!

So.. There were so many other bad things about this hotel, but i dont waist my time anymore for it. Guest relations was great, they wanted to hold us in that hotel, but we left to another, which was heaven.

Never recommend, keeping the hotel clean isnt so hard, or it is !?