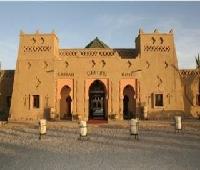 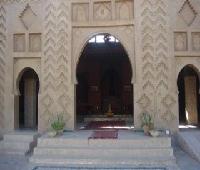 We were part of a tour group. Our room was average and a little dated. There was the usual amenities in the room including mini-fridge, free wi-fi, A/C. in-room safe, bathroom amenities and a hair dryer. The food at breakfast certainly left a lot to be desired. The milk for the coffee was soured and had to be replaced. There certainly was not a buffet available. Not impressed at all!!!

The Hotel infrastructure is outdated

I stayed in this hotel only for one night. The dinner (for a group of travelers) was okay but the hotel rooms urgently need a refurbishment. Especially the bathroom is outdated. However, the room was clean.

I was very disappointed with this hotel. It is very basic and I was expecting more. Internet in the lobby only. The restaurant was sparse and the food was OK. The room was OK. It appears they cater to tour buses. There has to be something better in Erfoud.

This is arguably the worse hotel I have ever stayed. To say it basic is an understatement. There is a pool and that is probably the best part of this establishment. The rooms were styled in the 70's and haven't changed since. The air con in my particular room didn't work and neither did the TV.
The cleanliness of the room was ok. The cleanliness of the food preparation left a lot to be desired.
The service we experienced was probably the worse ever witnessed in such an establishment. On one particular evening they ran out of beer in the bar!! I tried on another occasion to order food in the same bar and was told several times the waiter would be over, in the end I went to bed hungry. I'm not sure on how much it would be a night to stay here but I could only imagine you would get better else where for your money.
In a word "terrible" I would avoid at all costs.

There is potential, it could be much better

The bungalow was spacious, pity it was not better furnished. But the setting and all the bouganvillea are wonderful. The food was good, but it seemed they could not meet the demand, they were simply not equipped well enough to provide enough fresh pancakes, pita bread - whatever it was that everyone was waiting for.