- Hotel year Built - 2009 Year Remodeled - 9999 additional Property Description - Welcome To The Best Western Broken Bow Hotel And Suites, A Hotel Just Across The Choctow Casino. We Are Located On U.S. Highway 70 In Mccurtain County. Our 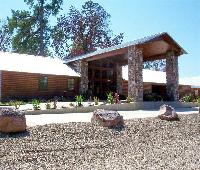 - Hotel year Built - 2009 Year Remodeled - 9999 additional Property Description - Welcome To The Best Western Broken Bow Hotel And Suites, A Hotel Just Across The Choctow Casino. We Are Located On U.S. Highway 70 In Mccurtain County. Our

With tax the total was $148+. While clean and decently appointed, That was a bit much for a $100 room at a Comfort Inn or similar property. The breakfast was OK with both bacon and sausage, but the eggs were powdered eggs with a very granular texture. Now, I can't swear they were powdered, but neither my wife not I could eat them. We noted others also throwing them away. There was no yogurt or even water available and the so-labled "Raisin Bran" was a pre-sugared substitute. Again, awful.

Motel was clean and rooms are comfortable. Reasonably priced and good breakfast. The shower head was great but the shower floor was pretty slick so be careful. Exercise room was ok. Check in/out was easy.

My sister an I needed to escape the city so we met up here (we live in Dallas and Tulsa). There were only smoking rooms available, which was almost a deal breaker, but they do a great job of cleaning the rooms as we did not detect any smoke smell. The staff was super friendly both at checkin and during the free breakfast.

I really liked this hotel you walk into a nice big clean lobby but it was hot. It seemed as if air in hotel lobby was not working. Staff very friendly and funny. Go to room and room was very big we was in the executive suite. Big enough for large family to stay in it. There's a pull out couch, 2 chairs, and bed in room so plenty of room for everyone. There's also a little kitchen type area in the room but there really needs to have some things done to it as it is a large area with lots of cabinets and sink but should have cooking stuff there or a large fridge. Beds was comfortable enough. They wasn't rocks but they sure wasn't clouds either. Bathroom seems good you could tell the bathtub insert was replaced which is good but it was replaced poorly. Breakfast was so so. Typical breakfast but eggs seem extra powdery and the sausage gravy a little extra water but the bacon was great and waffles was good. Pool is very small for a hotel this size but at least there is all ace to get wet. Pool wasn't to crowded when we was there. Over all there are a few problems but nothing to bad to over look this hotel. I would stay again if in broken how and bonus there is a casino (slots only) across the street within Walking distance.

The night we checked in, the staff was nice and friendly, when we ask for suggestions on where to eat she was very knowledgeable. When we arrived at our room it was not spotless but nothing I could not handle. The "delux" breakfast as put on the website consisted of a runny substance that was intended to be gravy. When I was attempting to make a waffle the lady who appeared to be stocking the bread came over and told me I was not cooking the waffle properly. The floor of the bathtub was so slick we had to wash it out ourselves. The swimming pool was Luke warm and very cloudy. the hallways smelled. In the parking lot on the ground were what appeared to be dirty used condoms on the ground. This place is over-priced for what it offers. Save your money and choose a different hotel.