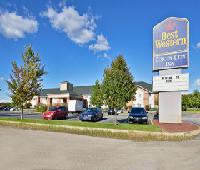 My kids and I were traveling with my son's baseball team and our team reserved 9 rooms at this hotel. The rooms were clean and comfortable. The staff was courteous. I was slightly nervous about having to sign a contract about team behavior that stated the boys couldn't congregate in the lobby, as they would HAVE to when they were meeting up to go somewhere--but as long as they weren't loud or running around, it wasn't a problem (they hung out in the lobby a couple of times). It was very nice that the hotel provided bottled water and coffee 24 hours--I used a LOT of both :) The breakfast was short several items on our first day, but made up for it the second. And the staff was so kind about it--they were very accommodating. The kids had a great time playing in the pool area, and our team had dinner out on the deck one night. Overall, it was a very pleasant stay.

We had a great stay

Our baseball team made it to the state championship which took place in Wabash, In. We started looking at hotels, so our boys wouldn't have to drive to and from 1 and 1/2 hours each way. We picked this hotel because of the proximity to the baseball field in Wabash. I called the manager and few days before coming down and got our group a group rate and hotels rooms all booked. When we arrived we were greeted and told that water was provided during the length of our stay. We were also warned about the other baseball group that was staying there. We made sure our boys were respectful and followed the rules to the team contract. On Wednesday our team played a late game and we got back after the pool and patio closed. We ordered pizza and asked if we could eat on the patio, they not only let us, they provided plates and napkins. They also turned the patio lights on for us. We had no issues with rude hotel staff. It might make a difference if you are keeping your kids under control and not letting them run and cause havoc. The curfew was 10 pm for the team contract, but they let the boys stay in the lobby until 12 am, because they were quiet and respectful! So all in all we had a positive experience and given the chance we would stay there again!

We were there with a baseball team. Big mistake as this is not a family friendly hotel!!! Oh my, where to start??? As already stated, we were there with a team and had a block of rooms, or so we thought. We weren't even all on the same floor. After trying the room key several times (and people continually had problems getting in their rooms with the key card all week even after getting new cards) we opened the door to a very heavy, wet and musty smell. Rooms felt damp and made clothes feel damp. The staff was very rude and disrespectful. Before arrival, we inquired about using their conference room if it wasn't already being used and were given unrealistic price quotes. We wanted a place where the boys could eat and hang out together. They had a strict "no congregrating in the lobby" policy, even hushing adults who were talking in a normal tone IN THE MIDDLE OF THE DAY!!! Never have I been in a hotel where we weren't allowed to hang out in the lobby. They later allowed us to use the conference room for free after inquiring about it again. They also tried to enforce a very strict 10pm curfew, which meant we were supposed to be in our rooms at 10pm. When they locked the pool at 10, we were told we had to leave the patio too, whose access was gained through the pool. We simply said we would go out the outside gate and come in through the front doors. Knowing we would need to clean baseball clothes, we inquired about the laundry facilities before arrival. The dryer was broken and we were told a part was ordered. It never arrived so we air dried the clothes in already damp rooms. The vending machine took several dollars from my child. There was only one ice machine but two floors. The kids were told they weren't allowed to drink the complementary bottled water. The breakfast area was very small and they obviously didn't plan ahead even though they had reservations for two baseball teams that would potentially be there for up to a week. They ran out of syrup, OJ, and 2% milk on our second morning there. I think they restocked two days later. After being there for a few hours, we were asked to sign a contract labeled "Team Guidelines" that was never presented at check-in that stated some unrealistic expectations including: 1. Guests are not to congregate or loiter in the lobby area. 2. No decorating of rooms or room doors (we had signs for the boys on the doors with removable no residue tape and did not remove them from the doors) 3. No excess noise - after 10pm, guests are expected to be in their rooms. 4. No more than 4 guests to a room...um...families with more than two children? unrealistic!!! 5. All alcoholic beverages are to be kept in guest room at all times. There were other points on the contract, but those were the most unrealistic. The others were common sense. By the way,we told them we would not sign the contract and actually started to look for a different hotel because everyone felt like they had to walk around on pins and needles and the boys felt like they couldn't have any fun. Long story short...this is not a family friendly hotel. The housekeepers and girl working the breakfast were the only friendly workers. The front desk workers, including the manager, Sol, were VERY RUDE AND DISRESPECTFUL!!!

Very nice facility for the price. Was good for our purpose. Quiet setting which we liked but might be an issue for some. We always appreciate the full breakfast. Pizza next door. A short drive offers fast food choices and access to stores that would provide essentials.

I made a reservation back in May for a trip later in the summer. I called a couple of weeks ago to check to make sure my reservation was taken care of. I was informed that the dates were off by one day and I wasn't going to be able to stay on the last night of my stay. The woman that I spoke to was very curtious and polite. When she wasn't able to help she transferred me to the manager. The manager answered the phone as if it was an inconvenience. I explained the situation and stated that I understand that mistakes are made. Solidad (name of the manager) continued to be disrespectful and hostile on the phone and said there was nothing could be done. She hung up the phone in the middle of the conversation because she didn't want to answer any questions. I called corporate office and was told the same thing. The corporate office called to confirm and speak to the manager. They were told that the manager had left for the day. This call was made immediately after being hung up on by Solidad. Nothing was done about the mistake on the hotel dates and nothing was done about the unprofessional actions made by a manager of the Best Western.