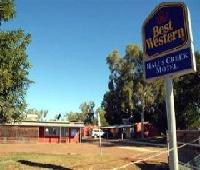 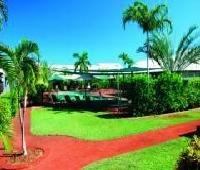 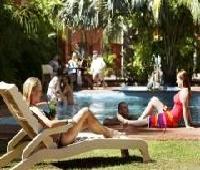 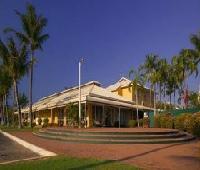 It was ok, but noisy.

We arrived to find they had cancelled our booking by mistake. They eventually sorted it out by giving us two separate rooms instead of the room we had booked (a bigger twin room), one 'every day' cabin and one budget double room. The double room was comfortable enough and everything functioned as it should.

The cabin on the other hand is comparable to an esky in size and appearance - it felt claustrophobic and the box aircon was excessively noisy. When we told reception about the aircon it was brushed off without an apology by saying 'you won't need that, it's cold here'...yet there was no other way to get airflow besides a tiny window which let all the noise in and only had poor security (fly screen).

Unfortunately the fact that there are chairs set up outside the cabin and motel rooms encourages people to linger and socialise at night making it noisy for other paying guests who may wish to rest.

I am not often bothered about noise however the motel was filled with workers who are obviously staying an extended amount of time. It was very noisy from individuals playing music loudly from their own rooms, talking/shouting for hours as well as music coming from Russian Jacks. I got the feeling this happens as a regular occurrence.

The walls are so thin I was also woken from the phone alarm of the neighbouring room going off at 4am, the person urinating in the toilet then subsequently leaving early for work. Obviously this issue would be difficult to rectify however.

The food at the restaurant was ok with friendly bar staff.

The beds were comfortable and the rooms was spotlessly clean which was great. Had a nice hot shower and the double room had pretty good facilities (tea/coffee/ironing board/microwave etc).

I understand that Halls Creek is a more remote community however there are definitely some simple improvements that could be made to improve people's stay.

Great motel for a stopover or short stay

Have stayed in Halls Creek previously, but in the caravan park, which we found to be "very basic" at best.

This timed stayed at the Halls Creek Motel and we were very impressed!

Room was tastefully decorated, with music and particularly the Beatles, as the central theme.

Room was immaculately clean, beds were comfortable, and shower was great.

This is the second time I have stayed at the halls creek motel whilst here for work. And it has failed to disappoint yet again. The rooms are immaculately clean, the quality of the towels is fantastic and the ammenities provided are all you need whilst here for business. I stayed in a family room this trip due to all other rooms being booked out, not surprisingly. The manager of the motel is welcoming and always greeted me with a friendly "good morning" and a "how was your day" in the evening. It isn't much but it is what makes a motel stay great over good. The food at Russian jacks is beautifully presented. I had all breakfast and dinner meals there, I did not feel the need to go elsewhere when the quality of the food is of such a high standard. The chef has proven the quality of food served to customers is testament to the integrity of his or her work. For breakfast have the works omelette, you will not regret it! I travel across the state once a month for a week and stay in a lot of motels/hotels, this motel has provided me with that sense of "family" as it is a family run business that I really enjoy while I am away from my own family. Thank you to the team for an enjoyable and remembered stay. I will see you again next semester. I would recommend this motel to all for that remote but charming stay!

Okay, but I expected more.

We stayed here about three weeks ago in room 19. The room was nicely appointed and quite clean but it has a very distinct musty odour to it - I commented about it to the girl who showed us to our room but she was too busy 'giving the spiel' that she obviously has to give all guests that all she did was smirk and nod. We couldn't sit inside the room due to the smell, luckily there are some chairs outside which can be used.
We had planned to eat at Cactus Jacks that night but decided to eat at the Kimberly Hotel instead as we were disappointed with the non reaction to our complaint about the smell. Oh and the air conditioner in the room was exceptionally noisy, every 1/2 hour or so it would go into overdrive and wake us both up, making a good nights sleep nothing but a fantasy that would never be fulfilled there (for us anyway). And there is little chance of showering without spreading water all over the bathroom floor as the shower was clearly designed for a screen that has been replaced with a shower curtain. But that's not really that big of a deal if you don't mind giving the floor a wipe when you're finished. :) It's a little sad really as we are semi locals who drive through Halls Creek regularly and we usually stay at the competition but thought we would try this hotel out and see what it was like.
Despite this critique the room was definitely clean and obviously a lot of thought had gone into making it look nice, which is great. The girl (who was the only staff member we met) was nice enough, just disinterested in any concerns I guess.

A surprise and great place to stay

We stayed as part of a group. We were told that this was the best hotel in Halls Creek.

We were not disappointed the rooms although a typical hotel room were spotlessly clean and well appointed. The dining area was large and had a well stocked bar.

When we were told the buffet dinner was ready that was another fantastic surprise. Large range of foods to select from and also the best range of vegetables we had seen to the past 2 weeks of travel. All food was cooked perfectly and the staff were prompt and very quick with clearing the tables.

Next morning the breakfast buffet was also to a high standard and the service was excellent as the night before.

Only negatives beyond the control of the hotel was the other guests with no consideration talking outside the room and some of the local yelling as they walked past at night.