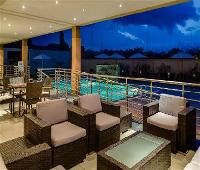 If you are in Benin City on a Sunday this is one of your best options for lunch. The spread is spectacular and you get good value for money. The supervisor was not so friendly with my children and his overbearing attitude was irritating but the food was so good I would visit again. Other staff had excellent attitude though

Best Western should be ashamed of putting their brand on this facility and from my experience here they will lose customers like me from their other facilities in other cities of the world! The poor quality and lack of variety of the breakfast and the general cuisine was made worse by our finding a fly and insect in the food at two different times during our stay! The rooms are old, furniture, sheets and towels are worn with some stains and the beds are not comfortable; I should know because I stayed in two different suites! Air conditioning, intercom, bathroom fittings all have issues and the staff could not find a solution to the issues I complained about.
I will strongly advice against considering this hotel cos I will definitely not be going back here again!

Everything about this hotel is average. It however used to be the best hotel in the city but I believe the management has somewhat neglected or reduced the effort put into maintenance. It is still a decent place to stay though. Still better than some other options.

My friend and I did not really plan to spend a night in Benin so the arrangement to stay in this hotel was last minute. My first impression was that this is not a purpose built hotel but a converted block of flats on a large area. There were at least 3 different blocks. The rooms were very large indeed.
We arrived about 7 pm and after check in went to the restaurant. Our order was supposed to take 20 mins but we spent an hour waiting. But for the fact that I'm not familiar with the city, we would have cancelled the order. The staff were not very nice that evening. We were later informed that there was only one chef available, hence the delay. My room had some mosquitoes and this was not friendly at all. The wifi provided was for only one device. The lighting in the restaurant and rooms was dull. There was some mould on the ceiling in my bathroom. However, on the positive side, we were allowed a late check out till about 1 pm. The water in the bathroom was drinkable- a first in my hotel visits in Nigeria. Plus there was tea/coffee available in the rooms.

The rooms were clean and the staff professional. The best part for me was the buffet, there was a selection of both african and non african foods. We were able to sample both and was very impressed with the quality of food and price. The next day we went to the pool area for drinks with friends and it was a peaceful and tranquil setting away from the city noise. Very impressed.