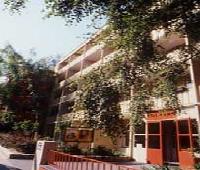 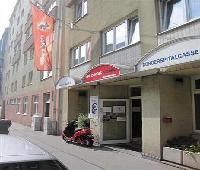 First of all, this is a hotel with a confusing name. We booked the room of Hotel Lenas which is located at this address and that made me and my friend spent about 1.5 hour walking around the streets to find this out. None of any people there could help cause according to those people we asked for help, they are not locals. Finally, we manage to connect to internet using free WiFi at a nearby restaurant and we found the exact location of this hotel.

Actually this hotel is quite near to Metro station, Gumpendorfer Strabe, about 5 minutes walk. Room was quite spacious.

It was basics hotel with all you need stuff. Nothing more than that. We was there just for one night simple reason someone after 11 o'clock someone was knocking too our door with hoodie. Beside that good location.

I booked this hotel in a rush during the high season as I stayed only 1 night for a business trip and it seems quite ok although I had seen some negative reviews. The room was clean, not as big as in the pictures though, the staffs were not that friendly and they don't really speak or understand English much.

It's fair for the price

Even though the hotel is cheaper than most, it is important to know what exactly you are buying.
PRO
The room is good (nice furnitures, big bed, desk, sound proof windows).
It's close to the subway station.
The building is in very good condition.
The Wi-fi is fair, but Its performance seems to be related to the room location, some people reports it's slow.
Near to Schönbrunn Palace.
CON
The subway station nearby seemed unsafe with strange people around.
The room is good, but there's a strange division of bathroom where the wc is separated. Is something common in part of Europe.
When we arrived, evething was clean and smelling well, but the cleanliness of next days were poor. Even when you put a "do not disturb" warning, the cleaning woman get in without asking. If you leave later, 11AM or more she skips your room and leaves you without toilet paper and with damp towels.
Terrible cleaning service!
The shower is very weak and it does not have a constant temperature control.
The desk staff is non-existent. They simply ignore you. You get in and out and they even look at the door.
There is no air conditioner.

Lack of professionalism and theft

Hotel managed by a group of Jordanians liars and deceiving. They took twice my money for 1 night reservation, telling me that in the morning we will solve the problem. Until morning the manager changed his mind and kept my money.
Also I was very disappointed by breakfast. Very poor. I will never stay there again and I do not recommend it to anyone.