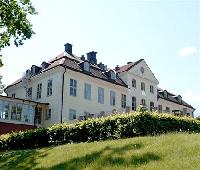 We arrived at this hotel for a one night stay in order to be closer to the airport. We got there at 9pm and the front door was locked. Nobody was working the front desk. There was a note on the door so I called the number and a guy answered and told me that he had just left the hotel, that It was gonna take him 15 minutes to get back. We waited for 45 minutes and the guy never showed. Thankfully I was able to book at another location. This room was prepaid so they've already charged $150 to my credit card. I've tried to contact them for a refund and no one has answered. Do not fall for this. It's a scam of a hotel. It's not even a Best Western hotel.

We are 2 kiwi couples in our 60's, were in Oxelosund for 4 days for a weedding. Not a lot of choices for hotels.
This was very average, very noisy on 2 nights, some staff very good, some not interested at all. Rooms and fitting tired. Shower over bath useless, bath not bolted in place and moves araound, not fixed to wall so water from shower goes all over the floor. Breakfast was basic and you had to ask for foods to be replembished when empty. If there was an alternative we would have considered shifting.
The good point was they let us bring in a take away pizza and our own wine and sit in the lounge area for a quick meal one night.
Don't like being negative on reviews but you need to be prepared for the standard that this hotel operates at.