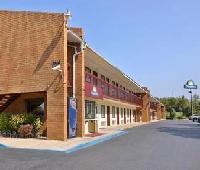 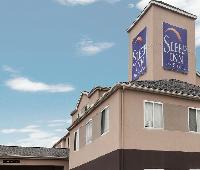 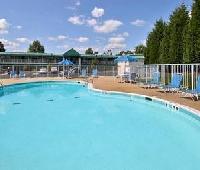 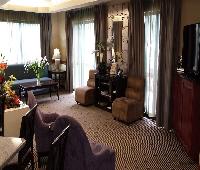 Probably the most terrible place I've stayed in. First we got there and the room smelled like cigarettes..was supposed to be non smoking room. Then there was something dark red on the carpet,(either wax or blood) THEN we went to take a shower and the know was broken .it was loose and wouldnt turn on. We called the front desk and she said we have to pull it and then twist. Well we pulled it and the whole thing came off. We called back to the desk and she was laughing cause that has never happened before. I didnt think it was too funny. All I wanted to do was take a shower cause I just drove 6 hours from pa . she was nice enough to give us a different room. The shower worked in this one (thank God ) but there wasn't a tv remote and the tv ,which should of been attatched to the wall was just leaning on the wall . there was someone's hairs on the bathtub walls. Some kind of orange stains on the wall,and also what looked like gun shot debre on the wall. Deffiently not staying here again

the worst motel that i have ssen yet.

dilapidated building, stench of stale cigarette smoke, desk clerk under the influence of narcotics, no Wi-Fi signal, filthy bedding, crud in tub, busted telephone, malfunctioning door handle. If you have any self-respect, do not rent here.

Met dead bus on the floor and bathroom, blood stain or rust on bathroom tile, Under the first bad sheet were rice and a huge urine stain. It was unbelievable. The lights were dim, you could not control the heating system even though it had a thermostat control.