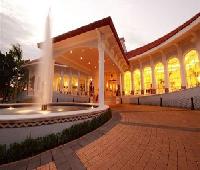 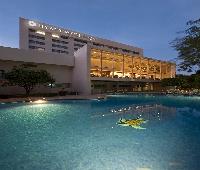 Villahermosa is another spot that gets short shirift. The joke goes, there's no villa and it ain't pretty! At first glance this may appear true, but if you stay in the "historical center" of Villahermosa and get out and walk a bit, you may find a surprise or two. The Casa de Azulejos, lots of fine colonial architecture, a fantastic stone pedestrian bridge over the Grijalva river... We stumbled onto a folkloric dance show provided by a local high school that was top drawer!

Don't miss the La Venta park and the Big Heads!

Look no further for a great hotel in Villahermosa's center. We give this BW a good four star rating, and the cafe at the entrance feeds you a good dang breakfast to start your day--it was included in the very reasonable price! It has everything you need to make your stay pleasant.

Note that the airport is a fair cab ride away. The hotel will call a car for you if you like...

Tired-looking but it does its job - no real complaints

I made a reservation at 11pm the night before via booking.com and was pleased to see the confirmation at check-in at the Madan came 5pm the next day. The Best Western is not bad value for just a night’s stay - at 1000 pesos including tax and discounted without breakfast - but it’s hard to judge based on a 15-hour stay. For what it’s worth, the Madan is really centrally-located given it’s only a 2-minute walk to the main shopping district in Zona Luz and 5 minutes or so to the bridge and Plaza de Armes.

Everything works well - shower, air-con (though again, hard to tell from remote which button was which), TV, wi-fi in room, front-desk, sockets, fridge, safe. I had room 14 which faced the main street so it could have been noisy but the town itself seems to shut down by about 10pm so it wasn’t a huge problem. If you have to do work there during the day - forget it! The window ought to stay shut all day then.

No lift at the hotel but porters and staff all spoke English. Also, free refill of water on my floor so that was very handy.

Visa accepted. It may be a bit old around the edges - wall paper coming off etc - but overall, recommended.

I was pretty ill when I stayed here, so I just wanted somewhere clean to lay my head. It was clean and comfortable. And shower was also good- relatively powerful, clean and with hot water. Also good wifi access, air-con, coffee making facilities and 2 bottles of water. Cannot comment on location, as did not venture out.

Cleaners were ridiculously loud in corridors in morning, so made no difference that I put 'do not disturb' sign on door. As ill, I only ate at the hotel restaurant. Big mistake. Everything luke warm, not tasty and service was slow and rude.

Beside the fact that there is no elevator and therefore no access for people with disabilities, the double room at 750$ is really not a good value. Sure there is a coffee maker in the room, but no coffee to go with. You can hear a lot of noise from the hotel machinery though I could not determine where it comes from exactly. I was given room number 26 and the electronic badge would only open room 23 ! After I went to the reception asking for a new badge (and given one), the same issue happened again, and again, and again : altogether 5 times i.e. each time I went out, I could not get in ! The invoice I asked for was ... a real estate piece of paper, without the hotel name.

We booked this hotel with our credit card points. When we checked in they demanded our credit card though no other hotels on the trip that we had booked with our points wanted it. When we received our bill we were charged for the two nights we spent there. It has been three months and four calls totaling about three hours and we still have not had the problem resolved.