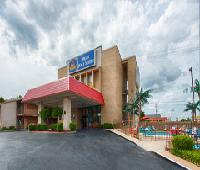 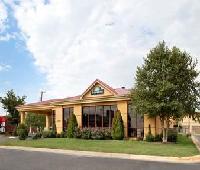 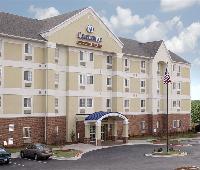 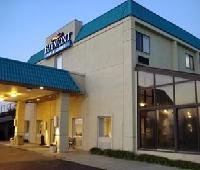 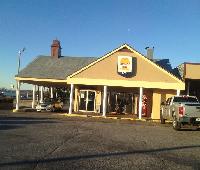 There were ants in the bathroom and When our children went to the hot tub at the Econo Lodge next door. Because the Best western gives passes to do so after their pool closes. There were people having sex in the hot tub. Then when we checked out around 8:55 our family of 5 were trying to get breakfast and the staff kept turning off the orange juice machine and taking food away as we were trying to get food. Because breakfast stops at 9! It was rude and disrespectful. Especially when the employees just kept saying breakfast stops at 9! And removing the food from us.

Your money is no good here

I made a reservation online through booking.com. The policy states that you must bring your ID and credit card for verification. I checked in advance that I could pay cash upon arrival...the answer was yes. No where on the reservation does it say they have to charge the room amount to the card. I had removed the money from my card before we left town as I commonly have troubles using it out of state and we were going to the casino on a Saturday so the bank would be closed if I had trouble. I got to the Hotel to check in and they asked how I would be paying. I said cash and offered to pay then, she said that was fine, but I can't check you in because your card is declining. I explained that the money was removed from the account but I was planning to pay cash. However the hotel must first charge your card for the amount of the room, and then you can pay cash. I referenced that I had called and asked why they wouldn't have mentioned this very inconvenient policy then, and she said it not a common problem so they wouldn't have thought to say anything. I referenced that the reservation said they only needed the card to verify...not to charge...and she could only say it was the hotel policy. So I said I guess I can just go to Walmart and put the money on a prepaid card, but that option was declined by her as well. Needless to say I did not get my room. The staff is rude. And I'm driving home from the casino at 3 am rather than getting some rest. The only coselation is I now had 90 extra dollars to spend at the casino.

Motel was in a good location off of the Interstate. Room was clean and the bed linens were of a good quality. Bath towels were above avg for most motels. Breakfast had a good selection of items to include eggs, pastries, meat item. Typical cereal choices.

Frustrating Stay for the price

Fro the price that I paid, I expected more. When we got there, my wife took a shower and the tub was clogged. However, I did call and maintenance came out right away and fixed the problem. The second day we were there, housekeeping did not come by our room at all. I called the front desk and they reassured me that they would be coming. However, they never showed up. The next day, they came and just dropped off towels. Not what I would expect when I pay the prices that I paid. They did not come in and clean, as I would have expected. We complained about it and it was taken care of later that day. However, I should not have had to say anything to begin with. I had actually had another reservation this week that was $30 less per day, but changed to this Best Western because that is where my son's baseball team was playing. I was disappointed in the product. I was happy that matters were resolved, but frustrated that we had to complain.

Pleasant stay and good amenities for this price

Small rooms but just fine for a single business traveler. Very helpful and friendly staff. Decent breakfast and outdoor pool with plastic palm trees to cool off on hot summer afternoon. I am out of things to say beyond this and resent your demand for 200 charachters.