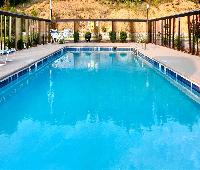 Worst Hotel Experience of My Life

I have stayed in dozens of hotels for work and have never experienced anything close to the treatment I received at this hotel. The two women who work at the front desk were the rudest people I have ever encountered in the hospitality industry. Since we work nights, I would go to the lobby to get coffee in the afternoon. After three days of having these women stare me down and ask what I was doing in there, one finally stopped me and interrogated me for about 20 minutes, claiming that I matched the description of an "unidentified guest." The next day the second lady spilled tea while I was in there and began screaming curse words at the top of her lungs. When I told her I hoped her hand was okay, she told me "not to be so stupid." When my coworker went to extend our stay, they interrogated him as well, refusing to believe that we were paying guests of the hotel since they weren't the ones who checked us in (a very friendly and helpful manager called Jeet did that). After finally getting the stay extended, neither of our room keys worked the next day and we were questioned once more. In addition, the phone in my room would ring every 3 to 4 hours with nobody on the other line and the pool gave both of us pink eye and stomach problems for days after using it. It was filled with bugs, hair, and there were often unattended children there. With the exception of the very friendly housekeeping staff and Jeet, it was hands down the worst treatment I have ever received as a guest. If I had to stay in that town for work again, I would rather sleep in my car.

We stayed here one night so we could go see Lorretta Lynn's Ranch. The breakfast was amazing, the service was great, and the room was very clean, nice, and big. We had the double beds. What a great stay!

Stayed for just one night I was heading North on the I40. Literally 2 minutes off the highway, this place is easy to spot and easy to access. The receptionist was a sweetheart who was very quick and efficient with check-in and answered all my many questions. The room was spotless, the shower was powerful and the a/c worked perfectly. Linen was crisp and fresh and the car park areas very clean and well lit. 3 or 4 good restaurants near by....that don't serve alcohol which for a weary solo traveler is a bit nonsensical. However...the gas station does, and you can take it into the restaurants with you :-).. I ate at The Log Cabin - great food and great value. I will definitely stay here again

Off I40 With TN hospitality

I travel for business so I stay in hotels often. This was a stop after a 12 hour drive so, I needed a hot shower and comfy bed with some peace and quiet. The rooms are large, very clean, and the bed very very comfy. For the price I was very pleasantly surprised. I jumped in the shower and the back of the plastic knob on the hot/cold broke. I called the front desk not to complain but, to just let them know and she immediately said she'd move me to another room and reduce my night fee. I said no to the move and thanked her for the fee reduction but, stated it was not needed. The knob breaking was not their fault as the whole room was quite new looking. A little while later and a neighboring room of several people loudly enjoying themselves inside and outside my room changed my view on actually moving to another room so I called back and she immediately said she'd move me with no problem. Very professional and welcoming. I'd highly recommend this Quality Inn.

I had to stay here for my recent business travels, even though the work site was about forty minutes away. The reason being is that there isn't much going on in this area. It is essentially in the boonies. I mean, the scenery is beautiful and everything, but there isn't much of a social atmosphere. How am I supposed to start a feud at a bar when there isn't a bar around? I mustn't get carried away, however, I have a hotel review to write.
This hotel isn't horrible, but it could stand for some upgrades. I'm talking about refrigerators and vending machines that actually take plastic.
Another thing, the staff could be a little more receptive and polite. I am not sure why I felt like I was being questioned by a police officer as a suspect while trying to do something as simple as checking in and checking out. ACQUIRE BETTER PR SKILLS!
All things considered there are worse places you could stay at. Also, the breakfast wasn't too bad either, considering the state of the hotel.
I've said what I needed to say here, now give me my points! Boom!