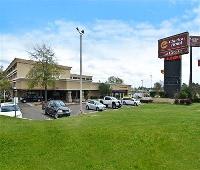 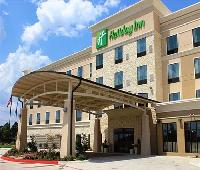 Hotel was very nice and easy access to freeway. Young man at check-in was very helpful. Room was extremely nice, clean and comfortable. Breakfast was excellent. Fir travelers with children there is a water park behind the hotel.

I'll start by saying the facility is very nice, especially considering the price. The staff was very nice at check in. I booked through priceline for 3 nights, and paid through Priceline of course. Check in went off without a hitch. On the third night of my stay, I arrived (after midnight) to realize my door key card wouldn't unlock my door. I went down to the desk to get a new card activated, only to be told that they showed no record of me being there whatsoever. Ever. Like, No record I had checked in, no paperwork (which I had filled out at check in stating name, address, car make, model, license plate #, and the general questions. Nothing. They showed some other name to be booked into my room. One of the desk attendants (the nice one) walked up to my room with me, and opened the door and showed him that it was indeed my stuff in my room which I had been in for two nights previous to this. We went back down to the desk where the other guy still acted as though I was somehow a squatter in the room because there was no record I had checked in or anything. I proceeded to pull up my priceline receipt and itinerary, showing I was booked there for those night, and had paid. He told me they would go ahead and "let" me stay, but that they would probably just have to eat the bill because they had no way of charging me? Charging me? I PAID through priceline and just showed YOU I PAID! That one of your employees messed something up was not my problem. I joked that it was ok if I wasn't charged, (trying to lighten his grouchy mood...like I had created this problem) and his reply was, "Sure it's ok for you if you're not charged, but it's not ok for us!" Whaaat??? Again, I ALREADY PAID THROUGH PRICELINE!!! So they gave me a new key card, and I spent my last night. I went down to check out this morning, the girl at the desk (who had originally checked me in) said someone checked me back out in the system for some unknown reason after she checked me in, and they wouldn't be charging me for the last night. To this, I said, well I already paid through priceline, you mean I will be refunded for one night? Her reply? "No...you will still be charged through priceline as you've already been charged and paid, but we aren't going to charge you for last night. Technically, to give you the room last night after you had been checked out, he should have swiped your card and charged you for it. WHAT?!?! I ALREADY PAID!!! What in the world??? I'm still confused, shaking my head, and very frustrated over this ordeal! I liked the hotel, but feel I should have been compensated in some manner for this instead of repeatedly being told they are not re-charging me for something I already paid for like they are doing me a favor.

Best stop on our LONG journey

Everything about our stay was above expectations from the price to the breakfast. My wife and granddaughter had lots of good things to say about our short stay. The breakfast was one of the best we've every had in a Best Western. Looking forward to our next stay, next summer.

This is a nice hotel. Halls, rooms, etc. all seem mew and clean. Apparently the guests before us must have dropped and broken a bottle of Georgio of Beverly Hills perfume from 1980 as it was overpowering, no way that they use a cleaner that smells like my great Aunt. (RIP Aunt Fay) It didn't stink, but man was it strong.
We could not get a room with a sofa sleeper as was reserved, nor was a roll-away available, so one of us had to sleep on the floor. Apparently they knew this was going to happen as there was a huge pike of comforters and pillows on the side table when we arrived in the room. One of the beds was soft and comfy, the other hard as a rock.
Everything about the hotel and the experience was either great, good or tolerable, except for the breakfast. The breakfast was almost ok, but the breakfast attendant was rude. She almost knocked my 9 year old granddaughter down bulldozing between us to add to the already 2' tall stack of paper plates.
There was one soggy egg left and I ate it, happy to not have to buy breakfast someplace. I choked it down while watching her roughly push her way into and in front of at least a half dozen other people. I have never seen anything like it. No smile, no excuse me, no pardon me, just a dazed "get the hell out of my way so I can get this over with" look as she zoomed back and forth from the back room to the breakfast area to fill the full items and leave the empty items empty.
I still tipped her, in case she was just having a bad day, and because it is my social obligation, but she sure did not earn it for good service.
P S, according to the kids the biscuits were like hockey pucks, the gravy tasted like water, and no one else in the family ate anything but me and that dang soggy egg that I forced down, so we still had to stop for breakfast.
We would, however, stay here again if in the area.

Great place to stay with caring staff! Beautiful, comfortable rooms for a great price. Breakfast wasn't the best, but they are working on it. Would stay here again any time. Very convenient to freeway and restaurants.