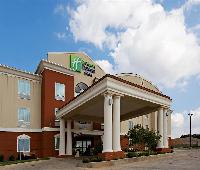 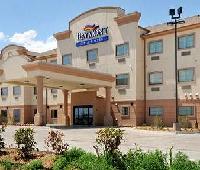 Snyder, Texas was our half-way overnight stop to Colorado this summer. While prices were similar, we've grown accustomed to the BW chain, especially when traveling out West. We were not disappointed.

The room was clean, the fridge was ice cold, the bath towels were small but fluffy, and the a/c worked well. We did not hear neighbors, not did we hear any traffic noise. It is an older facility, and the bed were softer than any motel where we've stayed in quite some time, and a little to soft for our liking, yet did not hinder our sleep.

Our only negative, and it's a small one, was the breakfast. Items were both scarce and stale, probably the poorest we've eaten since? We are not big breakfast eaters, so this would not be a determination in whether we'd stay here again. It's location, just north of the largest wind turbine forest I've ever seen, means it is doubtful I'll every be through Snyder again.

You don't was feather comforters in water

The title says it all. The feathers in the duvet cover were clumped together all around the edges of the comforter in baseball sized balls, and they stunk of course. The TV did not work with any ease, and the remote had to be exchanged for another. I gave up and just went to sleep. Then the owners upstairs made so much noise they woke us both up. That's not easy to do... There wasn't any breakfast either. We won't stay there again. We heard the purple Sage down the street was much better. Sorry Best Western...we usually love your hotels!

I stayed at best western Synder Tx because this is the chain of motel I desire. They are always clean well maintained and I feel safe at the motel. The staff is always curtious and goes out of their way to ensure customer satisfaction. I had lost a loved one from the Synder area who was young and had committed suicide the staff was VERY empathetic to my pain

The room was moderately clean. There was a dead spider on the floor in the bathroom and toilet paper in the toilet bowl. The beds were firm, but I didn't wake up with a sore back and they were comfortable enough to fall asleep on. The pillows were actually nice and cushy. The walls were paper thin, so I got woken up by a screaming toddler at 2 AM. I wound up unplugging the mini fridge because it was too noisy to sleep with. I tried turning the fan on to drown out the screaming toddler but the noise was irregular and not useful as white noise. The breakfast was standard dry danish and other breads, cereal, waffle maker, etc. The only hot breakfast left at 8:30 AM on a Sunday was a dry biscuit and an "omelet" with gross orange cheese. These things are generally acceptable at $60 a night, but they charge a $20 pet fee per dog, so I wound up paying over $100 because I have 2 dogs. The rooms are open to the outside, so really I should have just snuck them in, but according to their website, the pet fee is a flat $20, which I felt was ok for one night, and by the time they told me it was PER dog I had already mentioned I had 2.

Family trip to an event in Sweetwater, Texas. Motels in Sweetwater and Abilene were higher due to the event so we chose to drive to Snyder for a better price. We had 3 rooms reserve and all of them had some noticeable renovations. One of the rooms was missing the cross bar lock on the door. Beds were nice and comfortable and four pillows per bed was a plus. Clean and a decent hot breakfast.