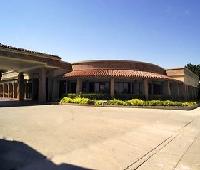 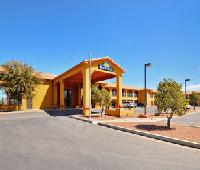 Very good location. The ladies at the front desk were very nice and helpful. The breakfast was ok the salsa that was served was excellent! We had stopped at the Hampton inn looking for a room and the called around and found us the room. The only things that were not great was after they cleaned the room no towels were left and you could see daylight around the door. The fitness room was nice.

We stayed here one night. (24th) This complex is spread over a large area. Not very friendly at check in. The room was comfortable. The breakfast was not very interesting. We got the impression here that nobody cares, over priced.

The Good (rooms) and the bad ( staff and breakfast)

Stayed here for one night during a recent road trip holiday.
Hotel is an old motel style property which is being re vamped.
If you are staying on the ground floor you can park right outside your room. There are no lifts (or should I say elevators?) so staying on the first floor was a bit of a pain with all the luggage we had. However, on positive side the room was large, clean and looked as if it had been renovated recently.
Breakfast we thought was very poor (based on fact we had complimentary breakfast in many other hotels on this trip and they were all far better)There was little choice but the coffee was good.
Staff were not very friendly when we checked in but the staff the following morning were hopelessly inefficient!
None of them could operate the new computer system that had apparently been installed a few days previously. A queue of guests were waiting to check out and were barely acknowledged by the staff ( including the supervisor) while they struggled to cope.
Staff training required here I think!

Oasis In The Desert

It is not very fancy, but the rooms are big and the staff is friendly. They have a great restaurant and nice breakfast in the morning. They were doing construction on one of the buildings, so was noisy at times. It is right on the main road, so lots of car traffic. Still, we enjoyed our stay and it is convenient to local attractions.

Don't know why this is no longer a Best Western, but it would be interesting to know. The property itself is clean with adequate rooms and very small bathrooms. There were a lot of oil field regulars there who must rent by the week or month. The buffet was ok, but I have to agree with another reviewer that the servers were more interested in the regulars than us. The property is huge and it looked like they were renovating several of the rooms in another building. It was OK for one night.