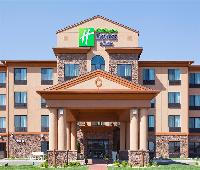 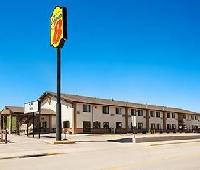 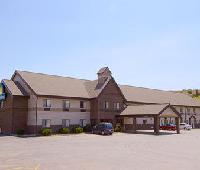 Handicapped persons should seek out another hotel.

We did a cross country to retrieve our daughter from school on the east coast, and decided to take I-90 from Boston across the upper US. Almost all of our hotel stay were at Best Westerns, which are not typically luxury hotels, but usually are clean and affordable. We decided to do some sight seeing around the Black Hills of South Dakota, so we booked in advance in Sturgis, SD.

Since I am an amputee, we requested a "handicapped accessible" room. When we arrived, we were told that the only room available was an upstairs room. Now, this hotel doesn't have an elevator, and since I am confined to a wheelchair, this became a real issue. I managed to get up the stairs, only to find that the room wasn't even a handicapped fitted room. NO shower chairs, NO safety bars in the bathroom, AND to top it off, my wheelchair wouldn't even fit through the bathroom door. We complained to the front desk, but were told that was all they had available.

We decided to "make due". I decided to check out the situation a little past 12:00 midnight, and found the parking lot only about 1/3 full. I again, checked around 6 am and found the same thing. NOT only that, but there appeared to be vacant rooms on the first floor.

I again went to the front desk to talk with the hotel manager and was told that the night clerk had apparently made a mistake. Then she gave a lame excuse that some of the rooms were being repaired.

Worst hotel I have ever stayed in dont stay here

Tried phoning hotel to book , no answer so booked a KING room on AARP. Checked in, got to ROOM 17 - two small double beds, room door is in indoor pool area so room stunk so bad of chlorine my eyes began to itch and I got a headache. There was the added extra of screaming children in the pool, a video arcade machine close to the door, and and wet carpet outside the door. We went to reception about not getting the room we had booked and PAID for , got told hotel was full and there was nothing they could do - they blamed Expedia. We went out for the evening ,came back when we knew the pool would be closed, went to bed -then the major problem begun. The pool pump house is in the room next door and runs all night, it vibrated through our room and made a loud tortuous droning noise which sounded like there was a compressor in our room. At 1am we phoned reception unable to bear the noise and the overpowering chlorine smell - we were told they could not turn the pump off, we asked if there was anything they could do and were told no. We ended up packing up and leaving , turning up at 2am at another hotel close by and paying for another room. THIS ROOM SHOULD NEVER BE ALLOWED TO HAVE GUESTS IN IT. The next day we phoned to see what they were going to do and were told the manager was not in town so there was noone we could speak to. They advised us there was no stand in person in charge at all - this is unbelievable or a lie. What happens in emergency situations? We were told we had been checked out and would not be charged for the remaining night we had booked, after much debate we were then credited with the disaster night. THEY STILL BLAMED EXPEDIA AND TOOK NO RESPONSIBILITY. BEST WESTERN YOU HAVE BEEN LET DOWN BY THIS HOTEL.

Nice place to stay in Sturgis

This is a nice spot to stay in Sturgis.
It's close to the freeway for quick access to riding.
The beds are comfortable and the king suite was really nice and a good size.

We stayed at the Best Western for a family reunion in Sturgis, SD. The staff was very friendly and the beds were fairly comfortable and it was quiet both at night and early in the morning. Also, we enjoyed the complimentary breakfast, blueberry waffles were delicious.